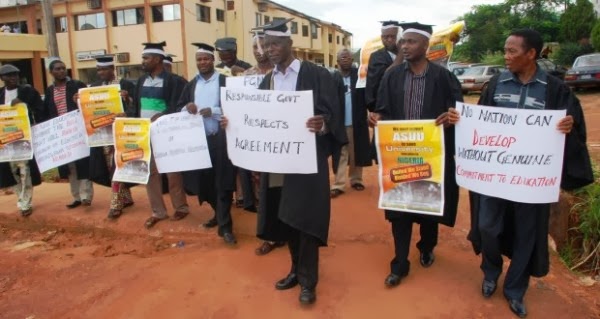 The 5-month old strike that has paralyzed the higher education system in the country is just about to be suspended.

Hours after Nigeria Labour Congress, NLC came in to resolve the differences between the Federal Government and the striking lecturers, a deal has been reached.

ASUU President made this known yesterday in Abuja.

Here is what Dr Fagge said while thanking all the parties involved in bringing the prolonged strike to an end.

“Honourable minister, if what we had agreed on at that 13 hours meeting had been judiciously documented and our members were convinced that it would be implemented, we wouldn’t have wasted this time because we have a lot of respect for the office of Mr President.

“Our members are intellectuals and it’s simply because over the years particularly since the signing of the 2009 Agreement, we have been pursing government to get that agreement implemented we only succeeded in getting implemented a portion of that agreement and here we are over four years, but I think it’s never too late.

“If we ever think that not placing high premium on our university education out of the doldrums, I want to assure all of us that we will be deceiving ourselves because other countries that are ahead have made sure that their universities are making cutting edge research” Dr. Fagge said.

We expect ASUU to make an official announcement about the suspension any moment from now.