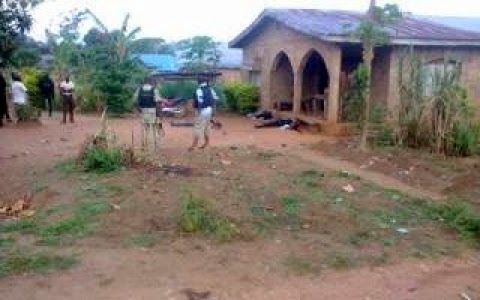 March 28, 2014 – Nigerian Policeman Killed Himself In Abeokuta After Killing Wife, Landlady & 5 Others

Sunkanmi Ogunbiyi, until his death was attached to the Ogun State Police Command, as well as his late wife who was also a Police Corporal.

Before what the Police authorities described as unfortunate incident, the late couple were said to have been having unresolved domestic problems.

The incident was said to have occurred at Akingbola Street, in Ifelodun Estate, Eleweran Area of the state capital, where the late couple had once lived before they parted ways.

Daily Sun reliably gathered that the late Ogunbiyi, who was also a corporal had warned his late landlady to stop harbouring his late wife each time they had misunderstandings. This was said not to have gone down well with both the late wife and the landlady, who was said to have always intervened in their domestic affairs.

On the fateful day, Ogunbiyi, who had just returned from a night duty stormed the venue of the incident, a 6-room bungalow, killing his wife.
Thereafter, he was said to have gone to his former landlady, whom he met on the mat with her grand daughter and snuffed life out of the two.

It was also gathered that tenants and neighbours who had rushed in after hearing sporadic gunshots were allegedly shot by the late cop, who later took his life by shooting into his throat.

According to him, the state Police Commissioner, Mr, Ikemefuna Okoye had visited the scene with other senior police officers of the command to assess the situation.

While appealing to the general public for calm, Okoye urged them to perceive the incident as one of the unfortunate social mishaps and not to judge the police with the incident.