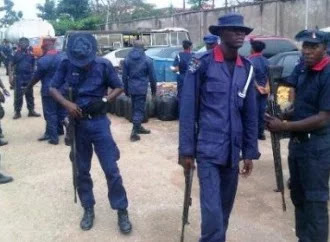 The Nigerian Security and Civil Defence Corps (NSCDC) on Friday said it had arrested a police officer and seven others suspected to have 496 25-litre kegs of petroleum products.

The Lagos State Commandant of the corps, Mr Grabriel Abafi, made the disclosure while speaking with journalists.

Abafi said that eight suspects, including a police officer were arrested by a team of the Anti-Vandal Unit of NSCDC at about 2 a.m. on Dec. 2.

“It will surprise you to know that among the sea pirates that were arrested happened to be a police officer who we are still investigating.
“The officer who happens to be among the Special Anti Robbery Squad (SARS) is still under investigation will be revealed after we conclude investigation.

“It was during the exchange of gun fire between the officials of the corps and the suspects that they were wounded, including the police officer.
“We immediately rushed the wounded suspects to the hospital because we want them alive not dead,” he said.

Abafi said that an AK-47 and a pistol were recovered from the suspects, adding that the AK-47 had the emblem of the Nigerian Police.

“The gun had police written on it and no junior police officer can handle such guns,” he said.
“The suspects were caught around Badagry axis after a tip off that they were loading the products from Badagry to Cotonou.
“On getting there, we arrested the boat,” he said.

NAN reports that the names of the suspects are Jimoh Olusegun, Bederaa Isaac, Fashawo Kobla.
Others are Akapo Joseph, Amos Bakom, ASP Achidika, the SARS attached to Badagry and two other suspects who could not talk due to injuries.

Abafi advised youths and people who were still involved in any form of illegalities to desist and find a legitimate business to do or face the wrath of the law if caught.

Photos: School Of Psychiatry Nursing Student Victoria Agbulu Dies In Fatal Accident In Abeokuta
Photo: Cholera Outbreak Looms In OAU As Students Are Forced To Use Dirty Water In Hostels