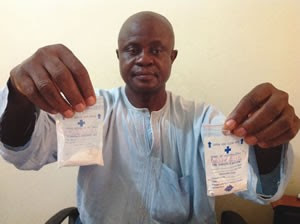 Despite doubts in some quarters about the authenticity of his claims, Professor Maduike Ezeibe of Michael Okpara University of Agriculture Umudike (MOUAU), Abia State, has insisted that his recent therapy for the dreaded HIV and AIDS is real and effective.

The discovery of the therapy, Ezeibe said, was a major scientific breakthrough in the search for a cure to the global pandemic.

He said after 19 years of hard work, he was able to discover the therapy and his research was eventually published in the British Journal of Medicine & Medical Research.

The Professor of Veterinary Medicine, who obtained his first degree in same discipline at the University of Nigeria Nsukka in 1986, Masters in Ruminant Medicine, and doctorate degree in Canine Medicine all in UNN, said he moved to MOUAU on leave of absence.

Speaking with Southern City News in his office, he said his research into the therapy known as ‘Antivirt’ (Anti-Viral Therapy), dated back to 1994 when he took the challenge to be part of the global solution to the HIV/AIDS scourge ravaging humanity.

Ezeibe said his work had been published by the American-based medical journal known as The Health.

He said he decided to publish his research work on the therapy so as to prove anyone who would doubt that a black man could develop HIV/AIDS cure, wrong.

He boasted that the experiment remained authentic and verifiable in any part of the world.

According to him, two essential minerals – aluminum silicate (kaolin) and magnesium silicate, used in the production of the therapy, have large deposits in Umuahia and parts of Abia State.

This, he said, would make the therapy cheaper and more affordable than the old anti-retroviral therapy.

He added that the therapy would take an average of two to three months to cure HIV/AIDS patient.