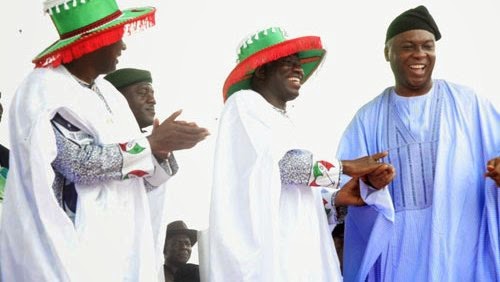 Against all predictions of a possible neck-to-neck contest between Saraki and the former Chairman of the Senate Committee on Public Accounts, Sen. Ahmed Lawan, the PDP played a smart one on the ruling APC to “install” Saraki.

The day began with suspense and a water-tight security siege on the National Assembly. The militarisation left most mobile phones of Senators and members-elect, guests, workers and journalists buzzing, seeking intervention on how to gain entrance into the sprawling Assembly Complex. No one was sure the election of the principal officers of the Senate would hold. In ensuing  confusion, a terse statement by the APC National Publicity Secretary Lai Mohammed inviting the Senators and members-elect for a meeting with President Muhammadu Buhari at the International Conference Centre (ICC) provided some relief. The invitation was said to be at the behest of the President. The summons however provided the PDP an opportunity to act faster to install Saraki.

While 51 pro-Lawan Senators relocated to the ICC, Abuja for an emergency audience with the President, 57 Senators (mostly PDP) hurriedly left for the Senate Chamber for the inauguration of the Eighth Senate. The bewildered 51 APC Senators, who were waiting endlessly for the President in ICC, watched the proceeding of the inaugural session from a nearby TV box.  Before the 51 APC Senators could race down the five-kilometre stretch from ICC to the Assembly Complex, Saraki had emerged as an unopposed candidate. To add insult to injury, President Muhammadu Buhari neither showed up nor sent apology to the stranded Senators at the ICC. They were left at the mercy of troops from the Brigade of Guards, who had already been deployed in the centre ahead of the supposed arrival of the President.

Conspiracy and the Buhari factor

According to investigation, the initial plan by the President was to delay the inauguration of the Senate by one hour for fence mending by APC members of the National Assembly and re-strategise on how to stop the PDP from capitalising on the crack in the party.  If the strategy had walked, the inauguration would have held at about 11am.

A highly-placed source, who spoke in confidence, said: “The President had actually made up his mind to be at the ICC but there were feelers that some associates and strategists prevailed on him not to dabble in the selection of the Assembly leadership because he will portray himself as an inconsistent leader having promised not to interfere in the internal affairs of the Legislature.

“Probably acting pro-Saraki’s script, these associates/ strategists made the President to realise that his last-minute intervention would amount to dancing to the tune of one man: Asiwaju Bola Tinubu.

“The joker probably made sense to the President and he chose to abandon the meeting at the ICC. Unfortunately, there was no communication between his office and the 51 APC Senators who heeded his invitation.

“It was around 10.35am, we saw that the inaugural session was already on and Saraki had been elected. If we were to be defeated, it should have been done on the floor.”

A battle of forces at play

•Gang up against Tinubu and the Southwest.

The outcome of the results of the election of leaders of the National Assembly showed a deep-seated hatred for Asiwaju Tinubu. Some APC leaders were said to be angry that President Buhari at every forum had always acknowledged Tinubu as if he was the only hero of change in the country. A few ones assumed that the President was conceding too much to Tinubu and that former Lagos governor must be cut to size. Others also felt that with the Office of the Vice President, the Southwest has got more than its fair share of power. The amalgam of forces merely used Saraki as the springboard.

Many, who won tickets into the National Assembly on the goodwill of Tinubu, opted to betray him. They just keyed into the plot against Tinubu without weighing the consequences.

•Absence of a power-sharing formula in APC

The refusal of the APC leadership to address this important index of power-sharing formula deprived its National Assembly members of the much-needed unity. If there had been an acceptable formula in place, the situation may not degenerate to this extent. What Saraki did was to be tactical in conceding the Deputy Senate President to the Southeast which is almost relegated to the background by the Buhari administration.

Saraki’s election has signposted the looming realignment of forces between some APC and PDP leaders in the race to 2019. Ekweremadu has been saddled with the responsibility of repositioning the PDP and he is already reaching out to aggrieved APC leaders.  In christening their group, pro-Saraki forces branded it as ‘Senators of Like Minds’. The successful alliance between PDP and loyalists of Saraki might be the beginning of what the nation should expect in the next few months. According to sources, one of the sections which the Eighth National Assembly might review is the one which makes defection unlawful. This will enable APC members in the National Assembly to romance the PDP, or engage in anti-party activities. Some APC leaders saw some hope in the proposed realignment and embraced Saraki.

The records of Saraki has built a huge political network for him. The mileage includes being a former governor, a former Chairman of the Nigeria Governors Forum (NGF), his role in the administration of the late President Umaru Yar’Adua, experience as a former presidential endowment with charitable war chest and now a two-term Senator.

Consequences of PDP’s coup for Buhari

Responding to the emergence of leadership in the Senate, Buhari said “though a constitutional process has somewhat occurred”, he would have preferred that the wish of the APC leadership was respected on the choice of candidates. The agenda of PDP in supporting Saraki smacked of “vengeance.” The coup is a signal of of likely antagonism, criticisms and reckless opposition politics that Buhari should expect henceforth. At least, President Buhari will be kept on his toes by the PDP if he has the political temperament to withstand it. The PDP is ready to hold him responsible for all his campaign promises and he might not have a rest of mind until he delivers.

What becomes of Saraki’s tenure? Will there be peace in the National Assembly?

Since yesterday, the debate has focused on the legality of the election of the President of the Senate by 57 Senators, the Speaker and other principal officers of the National Assembly. Prof. Auwalu Yadudu, who was a former Special Adviser on Legal Matters to the late Head of State, Gen. Sani Abacha, said the election of Saraki was illegal and unconstitutional. The Clerk to the National Assembly, Salisu Maikasuwa, however, said “37 Senators were needed to form a quorum.” The Constitution says any member of the National Assembly can lead any of the chambers with votes from one-third of members.

For a National Assembly that has been bankrolled from its first assignment, President Buhari may as well forget his anti-corruption agenda. A case of “money for hand, back for ground cannot be ruled out.”

But the APC raised moral issue on the emergence of Saraki.

In a statement by its spokesman Mohammed, the APC said: “APC decried a situation in which some people, based on nothing but inordinate ambition and lack of discipline and loyalty, will enter into an unholy alliance with the very same people whom the party and indeed the entire country worked hard to replace and sell out the hard won victory of the party.

‘’There can be no higher level of treachery, disloyalty and insincerity within any party,’’ the party said, vowing to resolve the matter using all constitutional and legal means available to it.”

Although the APC has directed the ‘dribbled’ 51 Senators to go to the Senate for inauguration, the nation might have not heard the last word on Saraki’s emergence and others. The PDP coup might lead to a change of leadership or distress in the Senate and House of Representatives. The extent to which Saraki is able to manage the aftermath of the election will determine his political altitude. But certainly, a counter-plot against his presidency is not unlikely by the PDP or even APC.

The tone of the reaction of APC suggested a looming crisis ahead. The APC is already threatening sanctions against some of its chieftains.

‘’The party is supreme and its interest is superior to that of its individual members. ‘Consequently, the APC leadership is meeting in a bid to re-establish discipline in the party and to mete out the necessary sanctions to all those involved in what is nothing but a monumental act of indiscipline and betrayal to subject the party to ridicule and create obstacles for the new administration.”

Unless an urgent reconciliation is put in place, the anti-party activities which led to Saraki’s Senate Presidency might cause a prolong crisis in the party. And with plans by the APC leadership to enforce discipline, some leaders might call it quit with the party.

Will Buhari now assert himself?

Even if President Buhari is not interested in a second term, he owes the APC a duty to keep the party intact. The coup in the National Assembly by PDP is a litmus test for his leadership prowess. The President may need to assert himself by playing a fatherly role to reunite his political platform that is in tatters. When some leaders met with the President after the coup in the Senate, he was said to “be hollow” without a solution to the crisis at hand. The time to act is now.

Here is what he said to Fayose, Ex-President Jonathan and Other PDP members on Twitter 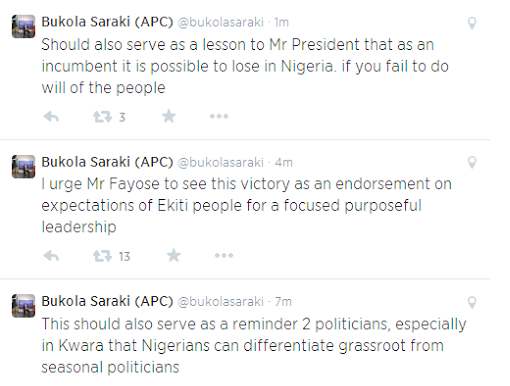 Saraki just prove to Nigerians that there are no permanent enemies in politics.

If he wishes tomorrow, he may switch back to his former party for convenience….

Continue Reading
You may also like...
Related Topics:Buhari, coup, pdp