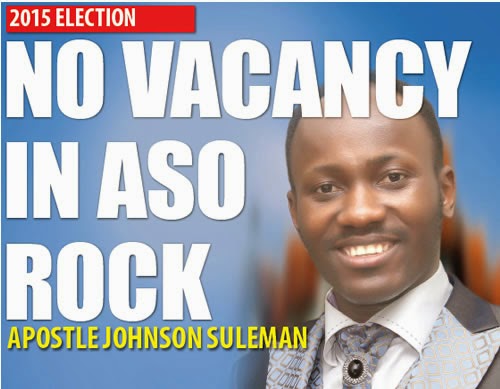 The man who prophesied that President Jonathan will win has some prediction on the President-elect.

In an exclusive chat with PunchNG, Suleiman said less than one year from now, Nigerians will hate Buhari because he’ll not bring the instant change they desire.

“Let me say this to you. In the next six months, people may stone Buhari. The reason I’m saying this is because the expectation is too high.

Nigerians expect Buhari to put gold on their tables. Two, the large chunk of followership Buhari has are youths and young people and they are impatient. Young people don’t believe in progressive change, they want change.

When they say change, they see a new picture. And Buhari has been talking from the two sides of the mouth. During campaign, he told us Boko Haram would be a thing of the past. Now, you are President-elect, you are saying people shouldn’t expect a miracle. Are you a pastor? If I wanted a miracle worker, won’t I bring a Mallam or a miracle worker?

When you were being voted for, we were not voting for a pastor, so don’t tell us about miracles. Like I said, Jonathan will be seen as a hero very soon because that’s the Nigerian story. Anybody who they feel is not doing well, get him out. The next few minutes, they miss this person. If by September, there is still a blink in power, people will start abusing Buhari. You said you were going to do this.

Two, who are Buhari’s footmen, the large chunk are ex-PDP people and of course you know, many are still defecting. Nigerian politicians are the most shameless people (I know); they can’t bear hunger. They are defecting now to lobby for offices. If you should check the people around the man, it gives you an idea of where the man is heading. If you check the agenda, listen to their campaign, it wasn’t about issues, it was about personality. Change this man! And I wanted us to talk about what the issues are, brainstorm to make things better.

I heard he had a five-hour meeting behind closed doors with President Jonathan. He has now seen the reality of how deep the issues are and it has now dawned on him that the man sitting there was actually managing to survive. That is one thing about leadership. When the ball is passed to you, you realise it’s deeper than you think.

So I do not see change in Nigeria. The only change I see is we have a breath of fresh air, a new government. To say there will be instant change in Nigeria, I doubt. We are praying as Christians and believers. It doesn’t matter what the enemy is trying to do in Nigeria, as believers, we know that the will of God will be done.”

By the outcome of their prophesies, we shall know them.

It doesn’t take forever to know who the real prophets are.

In 6 months time, we shall take a look back at Prophet Sule’s new prophetic oduology to see if it is indeed authentic.