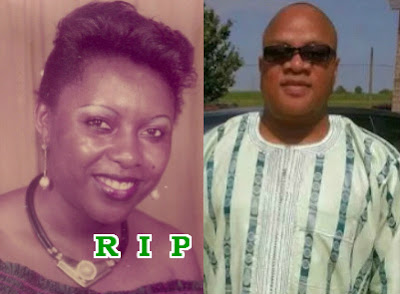 A court in Houston Texas has convicted a Nigerian, Alohaneke Osa for the 2015 murder of his fiancee.

The 59-year-old who showed no emotion was found guilty of the murder of 52-year-old Evelyne Ebane Epiepang at a court in Fort Bend County, Houston on Friday.

Although he was found guilty of murder, the jury is yet to determine his sentence.

Prosecutors alleged that Alohaneke used a kitchen knife to attack Epiepang, 52, his fiancée and her friend, Veronica Taku.

Alohaneke, who was living at the time in a section of southwest Houston that lies in Fort Bend County, was charged with first-degree murder and aggravated assault with a deadly weapon. Jurors acquitted Alohaneke of the assault charges.

Epiepang was stabbed more than 30 times and died as she called 911 operators for help.

Screams echoed in the courtroom for more than four minutes when prosecutors played the 911 call for jurors last week.

When police arrived, Alohaneke was on the phone with an attorney, his hands covered in blood.

Blood was splatted on his arms up to his elbows, Assistant District Attorney Amanda Bolin told jurors during her closing arguments.

“His mission was pain and devastation and he accomplished his mission,” Bolin said.

Defense attorney Eric Ashford pointed to what he said were weaknesses in the case against Alohaneke, many of which he alleged were caused by a haphazard investigation by the Fort Bend County Sheriff’s Office.

“Was this case taken seriously by investigators? They didn’t even do the forensic analysis needed to determine the murder weapon,” Ashford told jurors.

Ashford told jurors that detectives took several knives from the scene but that no testing was done to figure out which was used in the killing.

In addition, the attorney said, detectives took Alahoneke’s clothes when he was arrested but never tested them for blood or DNA.

Neither were fingernail scrapings were taken from the victim.

Also, he noted that detectives took Alahoneke’s phone but that jurors were never shown text messages as proof he was involved in the attack.

Ashford also attacked the credibility of Taku, the only witness to the killing. She had testified she saw Alohaneke “turn white like a ghost after the murder”.

“This could have been a hallucination,” Ashford told jurors.

“But did detectives investigate Taku’s mental status? No, during testimony they said they didn’t think it was important.”

Jurors now begin the penalty phase. Alohaneke faces a sentence of up to life in prison.