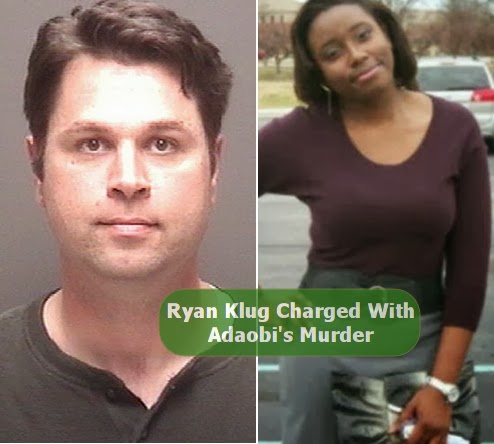 This is an update to the murder of Adaobi M Obih, a Nigerian lady who was brutally murdered last week in Columbus Indiana by her roommate .

In the latest findings by police, the PhD student was the landlord in this case and the man who murdered her was her tenant.

She reportedly interviewed a lot of people for a room in her leased apartment before making up her mind on Ryan Klug, the man who eventually killed her.

As we speak, Ryan Klug has been arrested by Police in Texas. He was caught on Saturday the 23rd of November, 2013.

Run-away killer, Ryan has been taken into Police custody in Galveston, Texas.

According to her work mate, late Adaobi Michaella Obih was a full-time test engineer at Cummins Inc in Columbus. She started her PhD degree last year.

She recently moved out from family and friends to her own leased apartment where she rented out one of the rooms to her killer.

As a dedicated employee of Cummins, her sudden disappearance from work raised a red alert at her work place after several calls to her cell-phone were not returned.

Out of curiosity, her work mates and family members stormed her apartment to later discover her lifeless body.

Her condition was terrible, family sources told police her throat was cut with a knife and multiple stab wounds was found on her.

Police documents said Ryan Klug sent a text message to his boss Sunday evening, saying he was going to be sick on Monday and then take a two-week vacation.

Bond was denied for Ryan Allen Klug, 36, following his 6:25 p.m. Saturday arrest in the 100 block of 24th Street. Klug was wanted on a homicide charge by authorities in Columbus, Ind., Galveston police Lt. Michael Gray said.

What a painful way to die.

May God receive her soul and bring her killer to justice.