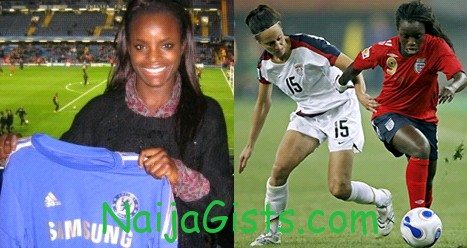 Chelsea ladies are delighted to announce the signing of Eniola Aluko from Birmingham City Ladies ahead of the third FA Women’s Super League season.

Aluko returns to Chelsea after originally joining the club for the 2007/08 season. In 2008, a spell in America with St. Louis Athletica and Atlanta Beat beckoned before Aluko signed for Sky Blue FC in 2010. The striker then returned to the British Isles last season to represent Birmingham City in the FA WSL.

Chelsea ladies new number 9 boasts 63 caps for England’s women’s team and played for her country’s Under-19s and Under 21s side before rising to the senior ranks in 2004 aged only 17. During her time with England, Aluko has played in two World Cups and helped the side to victory in the Cyprus Cup in 2012 before joining Team GB for the Olympic Games.

‘Eniola brings a huge amount of knowledge into a young squad and a strong winning mentality,’ said Hayes. ‘With her experience of the American game and international competitions, Eniola’s a great addition for the team and one we’re really looking forward to adding to the squad.’

The third FA WSL season kicks off next spring but Aluko will join the Blues for pre-season training in January. (Article by Chelseafc.com)