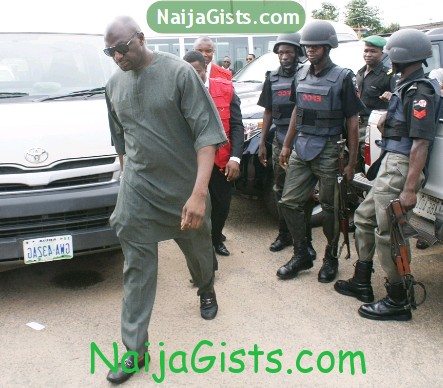 Justice Adeniyi Onigbanjo of the Lagos High Court today denied bail to Oluwaseun Ogunbambo, a major suspect in fuel subsidy fraud. The judge’s decision was announced this morning at the resumed trial of Mr. Ogunbambo, Habila Theck and their company, Fargo Petroleum and Gas Limited.

At the outset of today’s proceedings, Justice Onigbanjo announced the denial of Mr. Ogunbambo’s bail application. The court session featured new revelations about how the suspects manipulated their way to qualify fraudulently for payments from the Petroleum Support Fund otherwise known as fuel subsidy. The court heard that the suspects forged numerous documents that enabled them to benefit from subsidy funds through Sterling Bank Plc and First Bank of Nigeria Plc.

In denying Mr. Ogunbambo’s application for bail, the judge citied the suspect’s criminal antecedents. Prosecutors had disclosed that the suspect was notorious for jumping bail and traveling out of the country even though his passport was seized.

Today’s session focused on testimony by Abdulrasheed Ahmed Bawa, the investigating police officer (IPO) from the special team set up by the Economic and Financial Crimes Commission (EFCC) who looked into the case involving the trio of Seun Ogunbambo, Habila Theck and Fargo Petroleum and Gas Ltd.

Mr. Bawa, who continued his testimony that started yesterday, tendered documents to indicate that the investigation was prompted by petitions written by some notable Nigerians and public officers. Some of the documents were letters from the office of the Petroleum Minister, Ms. Alison-Madueke, an attorney, Femi Falana, and an anti-corruption group led by Dino Melaye, a former member of the House of Representatives. Also tendered were copies of documents from the Petroleum Product Pricing Regulatory Commission (PPPRA), the Sterling Bank Plc and First Bank of Nigeria Plc.

Mr. Bawa testified that he got to know the defendants after numerous petitions and allegations against them prompted an investigation into their activities. He stated that the trio of Ogunbambo, Theck and Fargo Petroleum and Gas Ltd were among those identified to have massively defrauded the Federal Government by obtaining billions of naira using forged documents that made fraudulent claims to having imported fuel products. The witness disclosed that the second defendant, Mr. Theck (who served as Deputy Managing Director of Fargo Petroleum and Gas Ltd), presented several documents that purported that their company imported a total of 9,982 metric tons (equivalent to about 13 million liters of fuel.

Mr. Bawa said Mr. Theck claimed that the company’s fuel imports were brought in using a vessel named MT Milleura. The court heard that the defendants used Sterling Bank Plc and First Bank of Nigeria Plc to carry out their transactions. Mr. Theck’s statement also claimed that the vessels were discharged at Masters Energy Depot in Port Harcourt, after which the company claimed nearly a billion naira in subsidy payments from the Petroleum Product Pricing Regulatory Commission.

Mr. Bawa disclosed that his team of investigators found that the defendants’ claims about fuel importation were false.

“After our analyses, responses received from Cornerstone Insurance Plc indicated that the Insurance Certificate presented to us by Fargo Petroleum and Gas Ltd was forged,” said Mr. Bawa. He added, “After our analyses, the response we received from Inspectorate of Marine Services indicated that certificate of quality presented to us by the second defendant were also forged.”

The witness further disclosed that an investigation to verify whether the said quantity of fuel was shipped to Nigeria on November 19, 2011 also revealed that the defendants’ claim was false and deceptive. Mr. Bawa told the court that Lloyd’s List Intelligence, which tracks the movement of vessels, revealed that the defendants’ claims about the vessels used for their purported importation of fuel were false.

According to the documents presented by the defendants to claim subsidy funds, the vessel was said to have taken off on November 14, 2011 and that a ship-to-ship transfer occurred between mother vessel MT Milleura and daughter vessel MT Diplomat on November 19, 2011. But Lloyd’s List Intelligence reported that the said mother vessel, MT Milleura, was in the Netherlands on the date of its said take-off and not offshore in Lome, Togo on November 19, 2011 as the defendants claimed.

Mr. Ogunbambo, a director of Fargo Petroleum and Gas Ltd, voluntarily reported at the EFCC office on July 18, 2012, but was detained after checks on the special team’s database revealed that he had jumped bail in the past, was involved in a huge bank loan scandal, and was also a suspect in two fuel subsidy-related fraud cases. During his detention, the EFCC’s forensic unit said it tracked email exchanges flowing through his Blackberry Smart Phone which was seized upon detention. E-mail exchanges through the address seunfargo@yahoo.com led to further revelations that Seatac Oil Company, from whom Fargo Petroleum and Gas claimed it imported fuel, not only belonged to Mr. Ogunbambo but was also not a fuel-dealing company. Investigators discovered that the so-called Seatac Oil Company was a holding company registered in the British Virgin Island.

Mr. Bawa also testified that Seatac operates an account with FBN UK Ltd, and that Mr. Ogunbambo is the sole signatory to the account.

The EFCC’s witness also disclosed that the Nigeria Ports Authority (NPA) and the Nigerian Maritime Administration and Safety Agency (NIMASA) checked fuel and kerosene importation databases for the period between 2006 and 2011. The two agencies found that the said MT Diplomat daughter vessel was never at the Port Harcourt port on the said date.

Mr. Bawa disclosed that the defendants’ claims regarding the customers they reportedly supplied the fuel they purportedly imported were not only contradictory, but also found to be outright false.

Mr. Ogunbambo and his co-defendants claimed to have supplied 70% of the imported fuel to Capital Fields Investment Ltd. But investigators found that the alleged recipient company was a bureau de change, not a fuel-buying firm. Mr. Bawa stated that a certain Israel Akinwunmi representing Capital Fields Investment Ltd acknowledged that he knew Mr. Ogunbambo as a customer who used the bureau to change money. But he denied that his firm ever bought a single liter of fuel from Fargo Petroleum and Gas Ltd.