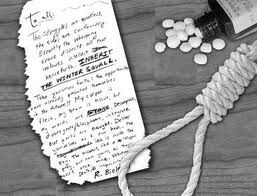 A 25 year-old housewife, Sakirat Abdullai, allegedly committed suicide in Ijebu-Ode, after allegedly taking a meal of pap, mixed with  shaving powder belonging to her husband.

Sakirat, who is mother of  a five-year-old boy, was said to have taken the mixture while having  dinner on Sunday at 33, Ereko St. Ijebu-Ode in Ogun State, southwest  Nigeria.

Ahmed Abdullai, her husband, a driver and member of the  Epe Unit of the National Union of Road Transport Workers, NURTW, was  said to be away when the woman took the action.

A friend of the  deceased, Isiaka Abdul, alleged that the woman had been vomiting in a  bucket found by her side after taking the poisonous substance.

Abdul,  who was in tears while speaking to newsmen, accused neighbours of not  coming to the aid of the deceased while she was groaning.

He berated the neighbours for not coming to assist the lady, although her room was widely open.
Abdullahi told newsmen that he was shocked when he returned home to see the wife’s lifeless body.
“I forced the door open because she didn’t respond when I started knocking,” he said.

According to him, it will take a period of three or more days before death can set in, if the condition is not treated on time.

Ogunsanya said that there might have been other underlying factors that led to the woman’s death.
The Area Commander of the Igbeba Police Division in Ijebu-Ode, ACP. Abdullahu Mudasiru, confirmed the incident.

Mudasiru said, however, that he was still waiting for full report on the incident.

The remains of the deceased were later taken to Imobi in Ijebu-East Local Government Area of Ogun for burial.