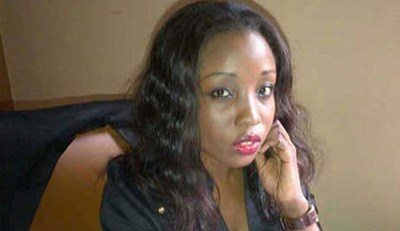 There was nothing about Bukola Sogbuyi’s appearance to betray her health condition. Looking radiant, chubby and peaceful, it was hard to believe that she was a sickle-cell carrier. Unlike the visible signs that usually accompany carriers of the sickle-cell disease such as the yellow colouring of the eyes or fragility, Bukola seems the opposite. Simply put, she is hyperactive. Sickle-cell disease is a recessive genetic blood disorder which prevents the easy flow of blood into the blood vessels causing pain and organ damage which could lead to risk of death or infection.
As she settled down for the interview, I couldn’t help but admire her gait and composure. This is the astonishing story of a vivacious lady who practically walks in the shadow of death

Background
Being the only child of her parents, Bukola Sogbuyi, an indigene of Lagos State, lived most of her childhood in London with her mother. She was among the recently passed out NYSC Batch C Corpers after graduating from the University of California with a B.A in Communication Studies. She also holds a Master degree in Feminism Theories and Organisational Communication.

Bukola grew up with the belief that she was as healthy as any other child until she was six years old. The doctors had told her parents when she was born that her genotype was AS but when she had her first crisis at the age of six, her parents were forced to carry out more tests which revealed that she was a sickle-cell carrier. From there on, it has been one challenge or the other. Her once perfect life suddenly came to a grinding halt as her parents try to keep their baby alive. “I would be asked not to play or dance at social events because of my health but inwardly I was dying to partake in those activities. Sometimes I break the rules, but I usually have to face the consequences of such actions.”

Challenges
Losing her mum in a plane crash at the age of 15 was a big challenge to Bukola who was closer to her mother and lived with her most of her childhood days. “It was one of my greatest challenges but she had taught me how to be independent and a survivor at an early age. With time, I got over it, moved on and do what I know how to do best; embracing life.”

Apart from losing her mother, Bukola has been faced with rejection as a result of her health status. “I have had many people not loving me because I’m a sickle-cell carrier.” She quickly recounted her ex-boyfriend mother’s words to her when she discovered Bukola’s state of health: “I don’t want you to marry my son because if you die young, he will be a young widower.”
Sadly, the young man heeded to his mother’s words and broke up with her. How she handled that, this is what she had to say: “I have to respect his decision, he has to listen to his mum but I do know that being a sickle-cell carrier does not make me less of a human being. I also have equal rights as any other human being”

In school, she was asked to repeat a paper because of her health condition. She had missed attendance of the paper and the professor had insisted she spends one extra year despite the fact that she passed the paper. However, her course mates were not happy about the professor’s decision and carried out a protestation on her behalf. “I still retook the paper though but the professor was reprimanded.”
After excelling in the first interview for a job as Customer Service Personnel in an organisation, Bukola was again turned down when the management discovered that she was living with sickle-cell.

Coping with Sickle Cell
Despite the stigmatization carriers of sickle-cell disease face, Bukola didn’t wallow in self-pity, rather she is motivated. “I understand the psychological downside of this ailment so I try as much as I can to motivate others not to lose hope. I try to build a social platform where I can reach out to my friends and give them a reason to stay positive. After all, people live with HIV and yet they get married and have children, why give up on yourself?”
Though a bit limited in her activities, the budding energy in her won’t let her keep to conventional rules on managing her health such as non-exposure to mosquitoes and cold weather. “I lived in the USA where there is winter, what am I supposed to do then? Hide? I have been to camp and other outdoor activities at night and I don’t fall sick. I only know when to stop but I don’t allow these limitations to stop me from enjoying life.”
“My immediate family had been of great support to me but my friends know me better. I love being independent so I hardly ask for help. It happens on rare occasions.”

Fear of Death
Usually, whenever a sickle cell patient have a crisis, family members and loved ones always panic for fear of losing them to death. But how does the victim feel? Do they also panic that this might be their last breath? Bukola seem to feel the opposite.
“I will see my dad cry whenever I’m going through a crisis and I will just laugh because he really looks ridiculous crying… I know he is scared that I might die but I’m not. I know I will make it. She smiled before continuing, “One of the beautiful things of living with a sickle cell is that you wake up every day and you have a new appreciation for life. People around you panic more than you the victim. I only yell when I’m in great pains but I don’t panic. I don’t let fear get to me. I’m never afraid to die.”

Walk4life
After witnessing the way her cousin who was also a sickle-cell patient was treated in one of the hospitals in Lagos, Bukola became resolute to have a foundation where she can reach out to people living with sickle-cell. “At the hospital, they refused to give my cousin pain killers because of the euphoric side effect of the drugs. They even called him a drug addict who was feigning pain. I knew he was in pain and I kept asking the doctors to relieve him of the pains but they wouldn’t heed to me, I nearly had a physical altercation with one of the nurses.”

Out of this bitterness sprang out the Walk4Life campaign which is under her brand, Progeny Foundation. “I wanted to make a change. I wanted to create awareness and reach out to people living with sickle-cell.” Though her dad was a bit apprehensive about her decision to go public about her state of health. “But when he saw my determination and plan, he gave me his full support.” she said warmly. That was all she needed to hold the first Walk4Life campaign last year which received enormous turnout through the help of her friends and loved ones.

‘I was overwhelmed by the number of people who turned out for the campaign. I couldn’t believe my eyes and nobody even knew I was the brain behind the campaign. I felt so good to be among such lovely and beautiful people.”
Apart from feeling good about the turnout, Bukola was also glad that some people were able to come out of thier shell and speak out for once about how they really felt about their health status. She narrated the ordeal of some of the people she met.

“You will be surprised at the rate of stigmatization people living with sickle-cell face. Some have been told by their parents not to reveal their health condition to anyone for fear of being rejected, some were told to give up on their dreams because they could die anytime. A female friend even confided in me how she had been abandoned by men once they found out that she was living with sickle-cell. It was an avenue for us to relate our challenges and experience to one another.”

But this wasn’t the only achievement of the campaign. Drugs and medication were provided for families and individuals as well who couldn’t afford such medical help.

Financial Support
Before the Walk4Life campaign became a reality, Bukola had to seek for financial assistance. “It was difficult getting assistance from corporate bodies because of the way NGOs has been abused in Nigeria. I had no choice than to depend on my monthly NYSC allowance and ask family members for support. All in all, we were able to carry out the programme and I’m glad. We hope to get sponsors for this year’s edition which is slated for December.”

Love Life
Despite the rejection she encountered from her previous boyfriend, Bukola is not afraid to love again. In fact, she is currently in a relationship. “It is weird but I do find myself dating guys with the genotype AA. It’s not like I go about asking them of their genotype, though I don’t know my boyfriend’s status now but we will soon find out.”
But if the genotypes were changed will she still fall in love with her kind?
“Yes, I will gladly date a sickle-cell patient. In fact, I will marry him!”
Did you raise an eyebrow? I actually did same but Bukola believes that with love, she can conquer all. On the issue of children, Bukola opt for adoption, but if her man has the AA genotype, she will definitely want to have children of her own and adopt as well.

Aspirations
Bukola seem to have many short-term aspirations which she gladly shared with me. From the little girl fantasy of being a doctor to a professional motorcyclist-which she fell off from quite often-to that of a lawyer. But now, her greatest aspiration is to be an inspiration to people living with sickle-cell. “I want them to look up to me as a fighter, someone who is not scared to enjoy life because of her health condition.”

As the interview came to an end, I couldn’t help but admire the spirit within. I lost two cousins earlier this year to sickle-cell and I wish they had met a lady like Bukola before they passed on because they all have something in common: The fight for life.