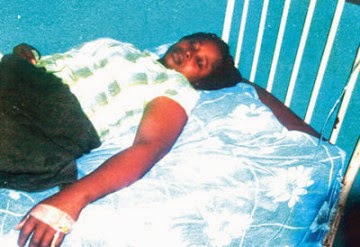 A woman, Mrs. Grace Okpara, has reported to the police that she was allegedly tortured by her bosses, who are Lebanon nationals.

Our correspondent gathered that Grace worked as a cleaner at a logistics company in Ibafo, Ogun State, where the Lebanese couple ─ Joseph and Hala Yasbek ─ were members of the management.

It was learnt that on Wednesday, January 14, Grace, who claimed she was dragged on the ground by her bosses during an argument, reported the matter at the Ibafo Police Division.

37-year-old Grace who hails from Ishan, Edo State, said she was assaulted for alleged dereliction of duty.

She said, “I work as a cleaner at the Lebanese company, and I earn N20,000 as salary. The incident happened on January 14 at about 11.30am. We were three working as cleaners in the company.

“That day, Hala said I did not clean the premises very well, but as I tried to explain, she kicked me and I fell. Minutes later when the husband showed up, I reported Hala to him, but he also slapped me.

“I fell ill after the incident and went to the hospital for treatment. I was treated at a private hospital in Ibafo. I was discharged on Thursday and then went to report to the police. The fee for my treatment was paid by the police at Ibafo.”

Grace’s husband, Uzoma, said they had also reported the matter to the National Human Rights Commission.

He said, “My wife has spent four years and two months at the company. She started with N15,000 and her salary grew to N20,000 over four years. The assault my wife suffered is part of the inhuman treatments by bosses at the company.

“We reported to the police and the NHRC so that they could look into this matter. My wife was assaulted at work. This is not proper.”

When our correspondent visited the company on Tuesday, the security personnel refused him access to speak with the management.

However, the Yasbeks, who have been invited by the police, said in their statement that the allegation of torture was not true.

The couple explained that it was Grace that attempted to beat Hala, while the husband, Joseph, tried to protect his wife during the scuffle.

The Ogun State Police Public Relations Officer, DSP Muyiwa Adejobi, confirmed the incident. He added that the police were making efforts on mediation.

He said, “The two Lebanese were invited, and we have asked them to come back with officials of the company. The Lebanese husband explained that it was the complainant who wanted to hit his wife, and he had to block her (Grace) by pushing her away.

“The fact is that the two parties had been having conflicts for some time.

“It is not a matter of assault alone. We are trying to mediate between them.

“But if the woman feels she had been so badly maltreated, the police can charge the matter to court.”