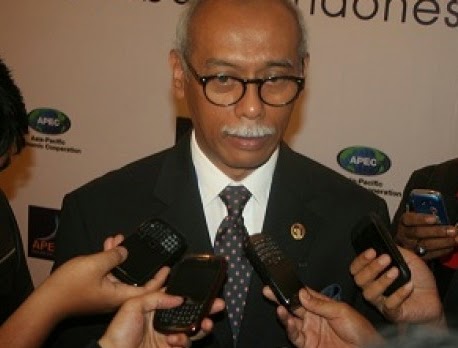 Wednesday April 15, 2015 – “Nigerians Are Among The Best People In The World” – Indonesian Ambassador Harry Purwanto

The Indonesia ambassador to Nigeria, Amb. Harry Purwanto said on Wednesday that Nigerians were among the best people in the world.

The envoy said this during an interview NAN in Abuja.
He said he had observed that a few Nigerians were creating a bad impression about the country abroad.

He called on the majority to do their best to ensure that the minority did not have their way in creating a bad image about the country.

“Nigerians are really good people it is only the minority few that are giving the country the bad image in other countries such as Indonesia.

“Nigerians are not as people perceive them abroad,” Purwanto said.
Purwanto said Nigerians with legitimate business were always welcome in Indonesia.

“Nigerians travelling abroad should prove that they are really good.
“They should not violate the laws of the land and drown the voice of the minority that is giving the country a bad name”, the envoy said.

Speaking on Nigerians on death row in Indonesia, the envoy said they were convicted after all due legal processes had been exhausted.
He said their trial went through three stages, culminating at the Supreme Court, adding that they had access to judicial experts throughout their trail.

He told NAN that Indonesia and Nigeria had a lot to benefit from each other, adding that as developing countries they could partner in tourism, education, media among areas.
Purwanto congratulated Maj.-Gen. Muhammadu Buhari on his victory at the presidential election and called on him to implement his campaign promises.

He said it was interesting that Nigeria, given its population and population was showing a good example in consolidating democracy in Africa.