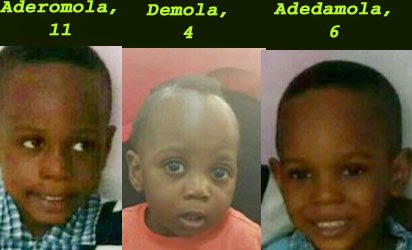 It is a happy ending for Mr & Mrs Orekoya, the parents of the 3 boys kidnapped from their house in Surulere area of Lagos on the 8th of April 2015.

The children who are currently at the Police College Hospital in Ikeja got their freedom on Tuesday after their parents paid an undisclosed ransom.

According to their father, Leke Orekoya, the kidnappers asked for N13 million in order to free the boys.

The children’s aunty, Adesumbo Alabi, said the family was happy that the children were returned hale and hearty.

“The incident still appears like a home video to me. When I came here and saw the situation on ground, I couldn’t hold back my tears. Even while we were looking for the kids on Sunday, we did thanksgiving after praying for hours, believing that the children will be back to us.

“Many people supported us with money. The appeal we made through the Facebook, television stations, radios, newspapers, were not in vain. But I don’t think the kidnappers were able to collect all the money they asked for,” she said.

Thank God for this.

“Nigerians Are Among The Best People In The World” – Indonesian Ambassador Harry Purwanto
Photos: Lebanese Woman Arrested With 5 Robbers For Using EFCC Uniform For Robbery Operations