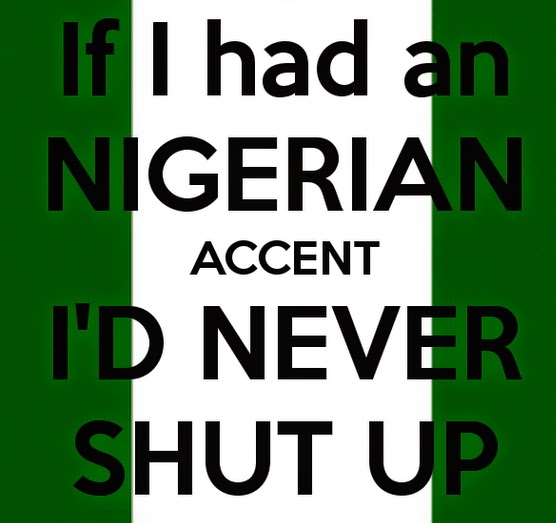 It’s become extremely difficult to identify a Nigerian from his or her accent these days. We are now sounding more American and British than the Americans and British people themselves. When you listen to radio and voice over done for TV commercials and radio jingles, You hardly hear the ‘Nigerian accent’ we grew up hearing again, and I begin to ask how we got here. Is this western influence? Did over half of our population suddenly travel abroad overnight to acquire an accent?

As I begin to ask questions, let me take a look at the people closest to me. Two of my uncles studied in the United States. Not just first degree but masters degree as well. One of them even had a Ph.D and lived there for over 20years before returning back; none of them have an American accent. One of my maternal uncles and another aunt has been living in the UK ever since I can remember. When they came visiting some years back, none of them had a British accent. And so does my uncle that has lived in Australia for about 20years.

My wife schooled in the UK for her masters degree and don’t have an atom of British accent when she speaks.

Her elder sister schooled for 2 years in the United States and doesn’t have an American accent either. My wife’s half younger brother and sister are half cast because their mum is a FULL white English woman and has lived with them as long as they can remember. They schooled in the UK to masters degree level and lived there for a while as well and they don’t have a British accent (though a few words can’t escape her). I can go on and on about so many others. So it beats me hollow when a Nigerian travels to the united states for 2 months and returns with an American Accent or when a Nigerian goes for her masters degree in the UK and starts talking through her nose when she returns. It’s even so bad now, that some people accompany someone who is traveling overseas to the international airport and comes back home with an accent. Hian!

I can understand that some people were born and raised there and have become part of their system and way of life. But one thing I have discovered is that those that travelled there don’t loose their Nigerian tongue completely. When I was in New York, I stayed in Manhattan with my cousin who had been living in the United States since he was 8 years old. He is about 30 now. He has a flat mate that is also a Nigerian who went there to school and has been living there. I observed that they had this strong black American accent when they speak on the phone or have a conversation with their American friends, but when ever we were having a chat in the house, they always returned to their Nigerian Accent. Even when he visits Nigeria, He speaks in his Nigerian accent even though he can speak like an American very well and not those fake and undone accents I get to hear on radio.

I have observed closely those ‘returnees’ that have lost their Nigerian accent really haven’t. Once in a while, when you have a conversation with them, it slips out in some words or sentences and they return to their other accent. But will you blame them, Speaking in an American or British accent is now a status symbol. We admire and respect anything that has a resemblance with America or England. We see them as more superior and since as they enjoy that position they would want to remain there.

I have worked in the entertainment and media industry for over 10years now and trust me, I have seen a lot. Most of our on air personalities now have a foreign accent. There was even a radio station in Lagos that wouldn’t even want to hire you if you had a Nigerian accent. Our voice over artists who grew up in Ibadan can’t even pronounce “Adeola Odeku Street’ anymore the way we will know that it’s a street in Victoria Island and not Los Angeles they are talking about. Some of them cannot even pronounce their own name very well. This is sad. I grew up listening to Tokunbo Ajayi, Cyril Stober and Ruth Benemesia Opia deliver news casting in a way that made you admire them for this professionalism. All that is gone.

A young girl once worked as a news caster in a TV station in Lagos and I heard that because she had a foreign accent, she got lots of privileges and I know this for a fact because its my industry and I have friends in every media house. She got holidays oversees and other perks others that had been working there could not dream of. Of course she left after a while and we hardly see her anymore but this is our reality. Though I thought her she was a good newscaster. I also know a certain media house on cable TV that that’s how they roll. They all speak through their noses and form cliques amongst themselves. You are valued according to your accent. So every one wants to belong, whether you grew up there, or you only visited for 2 weeks, or you went there for your masters degree program; all join, Just dey blow foneh dey go. That’s the only way you can be seen as a sophisticated babe or big boy. I remember one time when one of them referred to those of us with Nigerian Accent as ‘locals’. Na wa oh!

These led some of my friends in a certain radio station in Lagos (ok, I only know 2 of them and not we like we hang out; just famzing) to start what they call the LAFA Awards. LAFA stands for Locally Acquired Foreign Accent. It was done to expose On Air Personalities on radio that never lived outside the country and have a foreign accent. I had a good laugh as they called out the winners and I can’t wait for the next LAFA Awards.

I would also like to ask; I know a lot of white people who have lived in Nigeria for so many years. Some of them where even born here, especially the Lebanese. But how come they don’t have a Nigerian Accent? Why is it the other way round?

I think Nigerians should be confortable with speaking with their Nigerian Accent. CNN recently ranked the different accents in the world according to how sexy they sounded and Surprise! Surprise! The disdained Nigerian accent was ranked 5th. Ranked even higher than the American and British accent. I don’t think you need a foreign accent to have a high self-esteem. The people we admire here in Nigeria for their success and all they have achieved did all they did without an American accent and still have a high place in our society.

The likes of Aliko Dangote, Mike Adenuga and Femi Otedola don’t have one. Even in our entertainment industry, Tuface, P square, Wizkid and Asa don’t have foreign accent. Likewise Nneka, D’Banj and Don Jazzy that have lived abroad don’t have one talk less of Davido that was even born there. We should learn to embrace the way we speak and be proud of it just like the Americans and the British would never change their accent for anyone.

Ekene is a Filmmaker and TV Director. He was trained in Nigeria and Hollywood as well. He has produced programs for Mnet and MTV before setting up Riverside Productions, which is behind shows like My Big Nigerian Wedding etc.

Ruth Okoro: See The Lady Ini Edo Snatched Her Husband From In US
Love Is Good: Newly Engaged Funke Akindele Has Regained Her Happiness