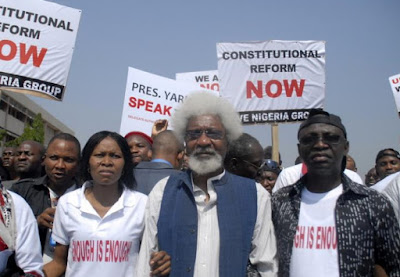 January 3rd, 2018 – It Is Time Nigerians Wake Up & Take Their Destinies In Their Hands

Since pump price of petrol was fixed at N145 per litre, the nation appears to have enjoyed stability and reprieve from incessant queues arising from fuel scarcity at filing stations. It became so easy to the extent that petrol attendants were going round or stationed at entrance of filing stations beckoning on motorists for patronage and even offering discounts on fixed prices. Nigerians were happy and expressed satisfaction at the turn of events.

Suddenly and in an attempt to remind us of the ugly past of celebrating major festivals especially Christmas and New year in fuel scarcity, Petroleum and Natural Gas Senior Staff Association of Nigeria PENGASSAN gave a notice of indefinite strike action due to staff lay-off by their employers. This was a dispute which government had no hand and which could be resolved through civilised and reasonable engagement either by payoff or reinstatement of affected staff.

Pronto, truck drivers stopped lifting products. Panic, chaos and confusion began. No doubt, PENGASSAN and other other unions in the petroleum industry have formed the habit of taking advantage of their privilege position to inflict pain and stress on Nigerians. The unions behave like babies whose feeding bottles must be full at all times. They have often received uncommon and prompt attention on all issues from mundane to not too consequential from the government.

The action by PENGASSAN is arrogant, unpatriotic, uncivilized and condemnable. Workers in other sectors of the economy face worse labour crisis, but go about them in nondestructive manner. The ripple effect of the action by PENGASSAN has since reverbrated across the country. For how long shall we continue on this route of national dislocation by workers in critical sectors of the economy?

It is time for Nigerians to wake up, take destinies in their hands, by speaking against those that misuse tools of their privileged positions to inflict pains on them and make money out of desperate situations.

The owners of tank firms, oil marketers and managers of filling stations are culpable. The Department of Petroleum Resources (DPR) whose responsibility it is to go after those that hoard petroleum products and sell above regulated prices should rise up and deal decisively with them. No doubt, people behind this evil acts are big, rich and influential; they must be exposed and shamed. The federal government should strengthen the laws, through the National Assembly, that punish offenders under the miscellaneous offences act.

About the author: Remi Oyebamiji writes from Lagos.

Continue Reading
You may also like...
Related Topics:call, Nigerians, up, wake