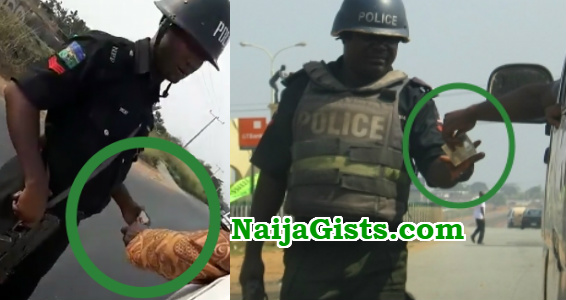 There is a saying among the Igbo people that when evil persists over time, it spreads its mat, lies down and institutionalises itself and this has sadly become the case of the Nigerian Police with roadside extortion.

It has become even more worrisome because the people themselves have accepted the situation as normal and I really mean they have accepted – not seemed to have accepted. One wonders why a people would arm a group of men and women and place them at strategic positions across the country to rob road users while at the same time outlawing ‘private’ armed robbery.

The situation is no longer funny and I think we should either constitutionally legalize armed robbery in this country or completely eradicate this uglier-than-vulture-malodorous-than-shrew evil. The case has so hopelessly deteriorated over the years from a covert operation to a broad daylight transaction with all the haggling and demanding for change and rejection of bad bills. Sadly, the Nigerian Army has not only also shamelessly engrossed itself in this depravity but has also since overtaken the police with a brazen and defiant boldness.

The Federal Road Safety Corps seems a big joke having since inception been in long-running competition with the police not only over its duties but also over this normalized anomaly.

The few road users who refuse to join the bandwagon are seen as either crazy or as congenital troublemakers. And so what are the results: Criminals get easily away with all sorts of crimes that could have been intercepted as long as they have enough crisp bills to go round. Drivers no longer bother about expired or incomplete papers and ramshackle vehicles provided they have something folded in their left palm with a smiling ‘officer officer how work?’ Innocent drivers and passengers are maliciously detained and frustrated and many others have accidental discharge hit them for refusing to comply with evil.

Police officers watch while armed robbery lasts right before them in broad daylight at traffic gridlocks only to carry on with their own armed robbery a few meters away, retorting “Wetin concern me?” to any confrontations. Army officers manhandle and subject law-abiding citizens, old and young, frail and strong to inhuman treatments, the commonest being frog jumping for refusing to ‘go see the oga’. Men and women of the Federal Road Safety Corps ignore vehicles whose bumpers scrape the roads from overloading while detaining others whose fire extinguishers and wipers ‘do not appear convincingly functional’. Communities set up and fund vigilante groups to perform the same duties for which these security forces are paid and to which they have solemnly sworn. The list is endless.

Traveling to Owerri a few weeks ago, we were waved down by policemen mounting one of the millions of roadblocks that one is forced to get used to in the country. I was in a public bus and this particular roadblock was in Orlu, Imo State. One thing led to the other and a young woman, who was cradling a baby that seemed only a night old and who was sitting beside me by the way, was ordered down from the vehicle with all her luggage for detailed investigation, that ambiguous Nigeria Police expression laden with blurred meanings.

This wasn’t very strange following cases of child trafficking lately prevalent in the country and aggravated by the young woman’s hesitant reply to questions thrown to her by the cops. I was beginning to bask in the pleasure of having for once, in a public transport, to share a row of seat with just only two other passengers when a man on the row before ours started to accuse the driver for the woman’s predicament, for refusing to ‘settle the officers with only an extra N50 and save everyone all the stress’. And as if that was not enough, the driver himself shocked me with his reply which had something along the line of how many more policemen he’d have to settle along the way and so has to dodge the much he could.

First, in no way was this driver responsible for the police doing what should be their job but it now seemed much the norm that he should accept responsibility than have the police to blame for anything, than have them do their work otherwise he might have had the police’s proverbial can of worms opened against him, against his vehicle and its road-worthiness. The truth is that if indeed the police had wanted to punish this driver for refusing to bribe them enough, it wouldn’t be through this nursing mother because we were almost immediately after the woman alighted, waved on to continue our journey. This is just one of countless incidents, one of the countless incidents of just how terrible we have become.

Several police chiefs after another have on assumption of duty ordered the dismantling of police roadblocks ostensibly to curb this menace but only to have these devious orders collapse over time. The whisper has become so audible, as my people would say, that even the deaf have overheard. I therefore strongly recommend that President Muhammadu Buhari should as a matter of urgency make real his anti-corruption stance on whose wings he rode to power in 2015 and prevail on his security chiefs to stamp out this evil and return our security officers to their constitutional duties.

The country’s services and particularly the police should be genuinely and completely overhauled. These men and women should be subjected to a thorough reorientation towards their original values and responsibilities. The masses should also be fully engaged by mandating the National Orientation Agency to wake to its responsibility of inculcating the proper ethics and values, rights and obligations into the people. An independent agency composed of patriotic men and women of proven integrity should be established by the National Assembly where citizens should be encouraged to report all cases of extortion for possible prosecution and punishment. It is too dangerous to toy with a time bomb when we already have too many explosions from Boko Haram.

About the author: Uzoaganobi Ebuka is a writer living in Imo State.

Opinion: Jesus Is Not White, He Is Black Like Ethiopians
It Is Time Nigerians Wake Up & Take Their Destinies In Their Hands