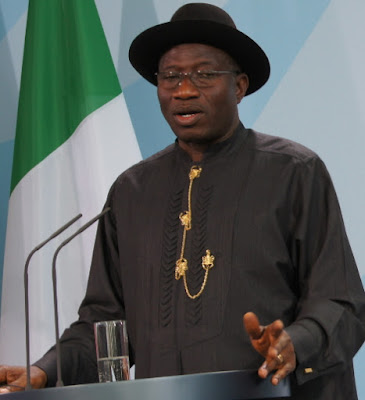 There are those out there who want ex- President Jonathan Goodluck put on trial for his mismanagement of the country when he was President.

Whilst I’m not a big fan of his I don’t think this is a good idea.

Traditionally, ex-Presidents in Nigeria, corrupt, dictatorial or inept, have enjoyed immunity from persecution. It’s an unwritten rule. Nobody is considered ‘big’ enough to try them! The only exception to this rule has been when past military dictators have removed each other from office and dealt with themselves in true military fashion – either a spell in detention or up against a firing squad!

GEJ still has a considerable following in the country and persecuting him will only lead to mass rioting and disturbances as some people still believe he is a saint. Unfortunately Nigeria hasn’t evolved, or isn’t civilized enough, to put an ex-leader on trial, peacefully, without big wahala ensuring. So for now they remain untouchable and above the law.

He probably won’t remember doing anything (- excuse the pun!) But yet again don’t forget he was just a by-stander most of the time while others ran the Presidency on his behalf requesting his presence only when they needed his signature on a money-transfer form!

But there is another way. GEJ can cooperate with EFCC investigators, helping them to unravel the myriad mystery of missing or looted funds. For instance was it a $2.1 billion dollars arms deal scandal or $15 billion dollars? Being the President at the time such a transaction would need his approval before the Central Bank would release any funds. Since he believes corruption is not a crime he obviously knows who the perpetrators are and it shouldn’t be too difficult for him to make a long list of all concerned and hand it over to the EFCC boys who’ll take it from there. It would be the patriotic – and honest – thing to do, if he’s capable.

Nigeria is currently enjoying a lot of bad press at the moment with the Senate Leader and others having their day in court. Do we really want to put a bumbling ex-President on trial to embarrass the nation in front of the whole world?

As an ex-President who has little or no credibility left, who’s forced to sneak around and doesn’t enjoy the patronage he used to, I believe he’s already been on trial and sentenced.

Let’s leave him to enjoy his Presidential pension, watch him turn up to give speeches in near deserted halls, struggle to write his memoirs or attempt to be an election monitor in some far flung banana republic.