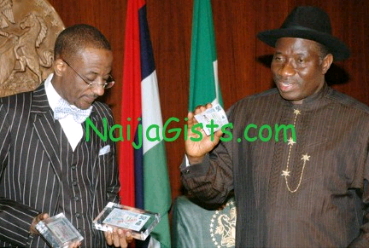 The Governor of the Central Bank, Malam Sanusi Lamido Sanusi has said the estimate for financing the 2013 was unrealistic because it had built on assumed oil price and assumed petroleum output which were not attainable given the historical background of the output of the NNPC and the fluctuating price of oil at the international market. naijagists.com

Answering questions at the question and answer session during the 98th birthday distinguished lecture of former Head of State, General Yakubu Gowon, the CBN governor stated that the budget was built on 2.53 million barrel a day for 365 days in 2013, which NNPC would not achieve because in the past, it had been unable to bring up enough money for 2.3million barrels and for 2.2million barrels.

He said the failure of NNPC had forced the country to keep augmenting by dipping hands into the historical savings to make up past budgets, thus leading to deficit. He pointed out that the country could not estimate that NNPC could process 2.53milliom barrels a day because the country did not know how much it produced.

According to the CBN governor, increasing the benchmark price to make up for the revenue leakages is not a solution but to fix the problems.

‘When it fell, the reserves collapsed from 62 to 30 billion dollars while the exchange rate of a dollar also moved from N118 and N145 officially and N199 for the rest of us over night’ Today, he said Nigeria has a reserve of 40 billion showing that the country is less prepared to cope with an oil price shock as it was in 2007 He reiterated that country needs to save its oil revenue to enable it cope with an oil price shock; ‘if not when oil price crashes, it wipes off the reserve and naira becomes 250 to a dollar and inflation becomes 50 to 40 percent and we begin to face the consequences’.

Answering another question, he said the problem of government spending is not the amount but the quality of the spending; pointing out that government at all levels must improve on the quality of their current and capital expenditures for the country to have a better economy structure.

Sanusi who argued that there is no need for the country to have more states because it would mean spending more for political appointees as ministers, advisers etc argued that in 2012 budget , 90 percent of the recurrent expenditure was spent on staff emolument and pension.

Debunking the argument that there is need for interest rate to be kept low to enable to enable farmers and business men have access to fund, he said if the rate is low, banks will need to pump more money into the system and said that rather than using the money for investment, it would be spent on buying refined oil, importing products such as tyres, rice , tomato paste which would result in importing inflation.(DailySun Report)