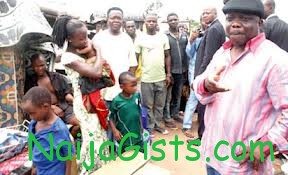 3 men were on Friday night electrocuted at the flood victims’ camp at Cavegina Primary School, Warri while a woman died from snake bite in the riverine area of Delta State. naijagists.com

The three people who were not flood victims died instantly when an electric cable snapped from a pole and fell on them at the premise of the camp. Consequently, pandemonium rocked the camp and hundreds of the refugees ran to different directions for safety as most of them could not bear the sight of the deceased.

It was gathered that two of the dead were Urhobos while the third was identified as a native of Calabar but their names could not be ascertained as at press time.

Eyewitness described the situation as unfortunate the untimely death of the men who they said were just passers-by. “I have never seen this type of horrible thing in my life. I am still imagining how these hefty men who did not bargain with death will just die like that,” said an Ijaw refugee who pointed at the spot of the incident .

Investigation showed that some victims who were gripped with fear relocated from the camp that night as they were still shocked by the incident. Meanwhile, a middle-aged woman was bitten to death by a deadly snake at Gbekebor village in Burutu Local Government Area of the state.

According to The Daily sun the woman was sleeping in one of the rooms that was not flooded but unknown to her, a deadly snake which came with the flood crept into the room and bit her . It was further learnt that the woman later died and her corpse and that of the three men had been deposited at the Central Hospital Morgue. (Dailysun)

Nigeria’s 2013 Budget Is Unrealistic – CBN Governor, Sanusi
Kate Henshaw Breaks Silence On Failed Marriage -There Is No Going Back