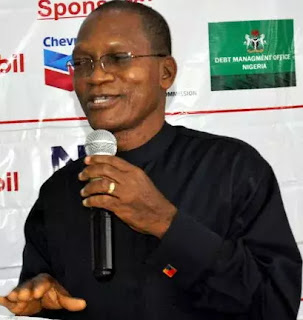 He made this known when defending the agency’s 2017 budget before the Senate Committee on Local and Foreign Debts in Abuja on Thursday.

Nwankwo said the amount included domestic and foreign debts owed by the country as at the end of 2016.

According to him, the debt stock of N17. 36 trillion owed by the country included debts of the Federal Government, the 36 states of the federation and the Federal Capital Territory (FCT).

Nwankwo also said that the difference was due to the projected debt service payments in respect of new financing that was not fully utilized, as only few loans became effective during the period.

He assured that though Nigeria’s debt profile was on the increase, it was not in a precarious economic situation that would warrant seeking for debt relief.

Nwankwo added that in spite of the recession, the economic indices had not portrayed Nigeria as a weak economy to warrant seeking for debt relief.

“Nigeria is not in a position to beg for debt forgiveness.

He said if borrowing would be genuinely committed to infrastructural development, it would go a long way in the move to develop the economy.

On repayment of the debt, he said the Ministry of Finance was making effort to expand the nation’s tax base.

According to him, this will be done by ensuring that people and companies that are not paying taxes begin to pay to boost the revenue base and reduce the need for borrowing.

He lamented that tax collection in Nigeria had been poor, contributing to reduced revenue generation. (NAN)