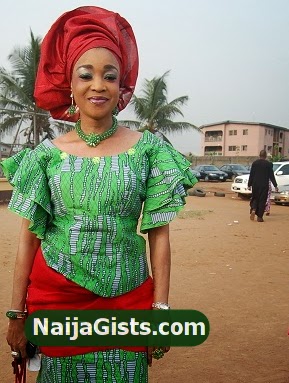 June 10, 2014 – Nike Peller Returns To Nigeria From US, Talks About Husband & Marriage

In this exclusive chat with Encomium magazine, Nike talked about her bareness battle and how her 51-year-old husband has been a gift from God and many other issues.

You have not been flaunting your husband since you got married years back, does that suggest that things are no longer working fine between the two of you?

Not flaunting my husband does not mean we’re no longer together or there is crack in my marriage. My husband doesn’t like publicity. He is not an entertainer like me, maybe that’s what keeps our marriage till date. He doesn’t like noise. And I believe you know that a lot of noise in some marriages within and outside the industry has wrecked them. There is no crack in my home and I thank God for that.

How many years have you been in marriage?

We have been married for 12 years.

What would you say has been working for the success of the union apart from not making noise about it?

A lot of things. But I give God all the glory. Almighty Allah has always been there for us. And I strongly believe that He will continue to be there for us.

Is your husband or his family not giving you problem because you’re yet to give him a child?

There is nothing like that. My husband is a believer, and he doesn’t reason in that way.

How does he relate with you as an actress?

In the first place, he didn’t know I am an actress when I met him. He got to know after a couple of months. Each time we went out together, he would see people hailing me, ‘Nike Peller! Nike Peller!’ He would just be wondering. I told him I was Nike Abiola. I remember very well he asked me which Abiola was that? I now told him Abiola from Iseyin, Oyo State. That’s how he got to know that I am Professor Peller’s daughter. He didn’t know anything about movies at all because he doesn’t watch home movies. When I even told him I am an artiste, he thought I meant the artist that draws or paints (laughs). The only few people he knew then were Ogunde, Baba Sala, Oga Bello and few others whom he knew via television series. It was after our marriage that he started knowing some of my colleagues.

How would you describe him?

He is a very wonderful man. He is not only a husband to me but a father. He is God sent. My husband is very loving and caring. He always gives me maximum support in everything I do.
We guess he must be far older than you…
(Cuts in) No, he is just 51 while I am above 40. So, the age difference is not that much. But still at that, I regard him as my father, not only husband. He is my pillar of support acting wise, and even magic because he is a very understanding man.

Is he not afraid of you being a magician?

No, he also understands the fact that there is nothing special about magic. The way some people see it, they think magic music surely involve something diabolical. Whereas, nothing like that at all. Magic is purely an entertainment stuff. So, my husband, as a person is not in anyway afraid of me. Even he encourages me a lot about it. He always reminds to go for rehearsals anytime I forget. He knows much about magic, I mean, in terms of what it takes. He is an informed person. He knows there is nothing scary about magic, despite not being a magician.

How often do you get shows?

We get shows regularly. I thank Almighty Allah for that. Recently, we had a show for Etisalat at Intercontinental Hotel, Victoria Island. Myself and my brother, Saheed (Zetto) performed alongside other artistes, including 2Face Idibia, Olamide, Kaffy and others. Those who watched our performance that day actually were carried away. Last year, we had a show for Nigerian Breweries Plc in Port Harcourt, Rivers State. It was also a very fantastic performance. Also last year, we performed for Rotimi Williams Chamber at Oriental Hotel, Victoria Island, Lagos. Another edition of that is coming up in August this year. Just recently, we performed at Federal Capital Territory, Abuja. On May 11, 2014, we also thrilled at Lizzy Anjorin’s movie premiere at Anchor Event Centre, Ikeja, Lagos, alongside King Sunny Ade. So, we thank Allah for helping us sustain our father’s legacy.
If not that you have said you just completed your new movie, the tale is that Nike Peller has finally dumped acting for magic…

It’s true people are saying that. The fact that I travelled to the US sometime ago kept me off the industry but since I returned, I have been active. But the fact still remains that you only feature in another person’s movie if you’re invited. Don’t forget, acting is my first love. That’s what I was known with ever before magic. Aside being an actress, I am also a producer and a costumier. So, it’s not possible for me to abandon acting for any other thing. Although, magic has taken much of my time in recent times, it’s not an everyday thing. I do magic when I am invited or we’re in collaboration with some people or bodies. For instance, there are some bodies that have invited us to the US and France. Very soon, we will travel to France to perform. When we return to Nigeria, we will stay maybe for a while before going to the US.

But it seems because acting is no longer paying off, that’s why you’re concentrating on magic these days?

Not that acting is not really paying off as people tend to believe, it’s the activities of pirates that is killing the business. For instance, after shooting your movie, the price the marketer will want to put on it will get you annoyed. You will even prefer to print the copies and dash them out.

On magic again, how much do you charge per show?

We charge N1m or half a million. It all depends on the person or group inviting us. Also, it depends on the distance. You can’t compare the fee we will charge outside Lagos State with the one within Lagos. Distance matters a lot because we will need to transport our equipment. So, we don’t really have a fixed price per show. Also, we have a variety of magical displays. It depends on the class and category of people we’re entertaining.

We learnt there is this fear of coming close to you again from some of your colleagues, how true is it?

Yes, something like that but not all. We’re all colleagues, and some of them are learned. They have also travelled outside this country. They know what magic is all about, at least a little. So, they can’t be scared of me, except some few who may not know anything about magic. Just as you rightly said, the last time I performed at Lizzy Anjorin’s event, I overheard a lot of my colleagues saying, ‘Ha! I won’t eat with Nike Peller again o. How did it happen now? after all, we didn’t close our eyes.’ And so on. I just laughed because they don’t know about what we call magic. No voodoo whatsoever, it’s all about entertainment.

Why not put some of your performances on VCD or DVD so that those who don’t have the opportunity to watch you live can enjoy such in their homes?

We can’t do that because people will think we’re trying to put some effects into it. It’s better we invite them to see us live.

Let’s go a bit personal, what’s your greatest pain at the moment?

Nobody that doesn’t have one thing or the other as part of his or her ups and downs except God. So, whatever it is, God knows best.

Okay, what has been your greatest joy so far?

That was the day I was invited to the US for an award. I was so happy that I was recognized even beyond the shores of my fatherland. It’s not by my power but the grace of Almighty Allah. I was also elated the day I was invited to The Republic of Ireland for an award as well. It was really a thing of joy that people out there value what I am doing here in Nigeria. I feel fulfilled about it. And I will continue to thank Allah for His mercies and blessings on me and my family. I am also using this opportunity to appreciate my fans for being there for me all the time. May Allah bless them all.

Can you tell us your greatest desires right now?

A lot, and I believe God will grant them. I desire long life and good children from God. I want God to bless me with lovely children, peace and other good things of life.