3 pregnant women participating in the Benin zone of the immigration recruitment exercises slumped and died immediately inside the main bowl of Samuel Ogbemudia stadium on Saturday.

The applicants had turned up for the exercise as early as 6am , but the screening couldn’t start till 2:15pm when some of the applicants started leaving after the stampede .

Trouble started around 10 am, when the immigration officials incharge of the screening lost control of the crowd prompting the soldiers on guard to start shooting sporadically in into the air.

Over twenty eight thousands applicants that took part in the one day exercise started running for safety that resulted in stampede .

As the time of filing this story over twenty persons are been revived at a nearby hospitals while the three pregnant women died before help came their way .
Some of the applicants who with our reporter condemned the way and manner the exercise is be conducted with the immigration officials in charge having no human feelings.

Mr Isaac, an applicant expressed shock over the inhuman way they were been treated by the recruiting officers .

“Can you imagine sir, this is 2: 10 pm , we are still loitering around with no concrete information from the recruiting officers.

“Oga, they should help asked the immigration officials, why the shooting . To organize the applicants is easy . Now , the shooting has cause big problem .

Three pregnant women died, over twenty persons are been hospitalized . Now, the exercise is on hold .”

In another development, Hospital authorities at the Rivers government-owned Braithwaite Memorial Hospital in Port Harcourt have confirmed that four candidates died during a stampede at the Nigeria Immigration Service recruitment.

The News Agency of Nigeria (NAN) reports that more than 20,000 candidates were involved in a stampede at the Liberation stadium, Port Harcourt, venue of the exercise on Saturday morning.

“I can confirm to you that four have died, four others in critical condition while four were treated and discharged,’’ the source said.

The source, who pleaded for anonymity, said a pregnant woman was among the dead.

The source said doctors and specialists have been called back to duty to assist to save the lives of the remaining four candidates on emergency list.

“Some of the candidates were in bad condition because they were trampled upon during the stampede,” the source said.
At the military hospital, Port Harcourt, authorities confirmed receiving some of the injured persons but said they were being taken care of.

However, Mr. Abang Bisong, the Public Relations Officer of the Nigeria Immigration Service, Rivers Command, confirmed to NAN that some of the injured were taken to the hospital but did not know their condition.

The Immigration recruitment held across Nigeria on Saturday with several reports of deaths and stampede from different states. Advertised positions were for university graduates, diploma holders and Senior Secondary School Certificate holders.

In Abuja, recruitment, at least seven job seekers died at the Abuja National Stadium while scrambling to secure seats for the recruitment test.

The National Hospital, less than a kilometre away from the stadium, received the bodies and confirmed the casualty figure.

The stampede ensued after the over 20,000 job seekers scrambled through a poorly organized barricade at the test venue, witnesses said.

The police in Abuja said they are yet to get information on the deaths.

Some 25, 000 applicants were scheduled to participate in the recruitment interview at the 16, 000 capacity Liberation Stadium in Port Harcourt.
NAN learnt that several applicants were seriously wounded, while some lost their certificates in the melee.

Mr. Bisong said the stampede was caused when about 20, 000 candidates forced their way into the stadium.

“During the stampede, some candidates fell and were trampled upon by others, while some became unconscious due to the incident,” he said. “The victims have been taken to the Military Hospital for rehabilitation and treatment. At the moment, we have not received any information on their present condition.”

An eyewitness and victim, Mr Jasper Saturday, said the situation would have been worse but for the response from security personnel.

“The immigration officers were trying to screen candidates from the stadium gate and in the process some candidates became impatient and started pushing us from the back.

“Those of us who were in the front fell to the ground because others stepped on us and as a result, some candidates lost consciousness.

“If not for the gunshots released to the air by security agents to scare the candidates pushing us from behind, there would have been several casualties,” Saturday said.

However, in Imo State, Gov. Rochas Okorocha assured the job seekers that he would ensure that they were not short-changed in the recruitment.

Mr. Okorocha gave the assurance in Owerri on Saturday at Dan Anyiam Stadium where thousands of applicants gathered for the aptitude test for employment in NIS.

He said he would ensure that the employment quota for Imo was filled by indigenes of the state.

The governor said that not all the applicants would be successful and advised them to also apply for jobs in the “Imo Youths Must Work programme” of the state government.

NAN reports that no fewer than 10 applicants, including three expectant mothers, fainted while waiting for the commencement of the test.

Some of the applicants expressed disappointment over the manner the exercise was organised.

An applicant, Nwakuche Isigu, said he left his village in Oguta Local Government Area by 6a.m. to ensure that he arrived early at the venue.

Another applicant, Onyemobi Anyanwu, called on the Federal Government to create more jobs for the youth.

In Kebbi, 5,000 applicants assembled at Halliru Abdu Stadium, where officials had tough time controlling the applicants.

The venue witnessed a boom in economic activities as food and snacks vendors as well as sachet water sellers enjoyed good patronage.

The police, Federal Road Safety Cops and National Security and Civil Defence Corps personnel assisted in the maintenance of order at the venue.

Three of the over 11,000 candidates for the aptitude test for recruitment into the Nigeria Immigration Service were on Saturday feared dead in Minna, Niger State capital.

They died following a stampede during accreditation and clearance of candidates to enter into the examination hall.

Situation got out of the control of Immigration personnel as the applicants overwhelmed the officials supervising the exercise forcing one of the officers to open tear gas and in the process seven persons collapsed and were rushed to the hospital where three persons gave up the ghost.
Trouble started when the applicants became unruly as they complained of the slow pace of the accreditation the Chief examiner from the headquarters of the service whom we gathered insisted to call names of the candidates based on the serial numbers of the application forms but did not go down well with the candidates.

This development precipitated a rowdy session as most candidates who were on a queue became apprehensive and complained that the line, which was over a kilometre was not moving as anticipated. 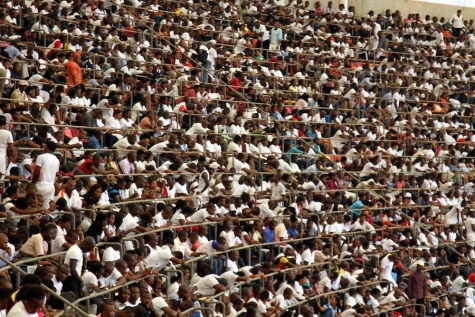 One of the victims that was rushed to Minna General Hospital was in a critical condition while the other three injured victims are said to have been stable but quarantined from the public and the media.

Efforts to get details about the victims were fruitless as the hospital authority and staff refused to comment based on security directive.

But a medical personnel confirmed that three of the seven injured persons were dead, one in critical condition while the other three are in stable condition.

He further said that the bodies of those who died have been deposited at the mortuary .

But the state Commissioner for Health, Dr Ibrahim Sule said only two of the applicants dead. According to him, “one female was reported dead on arrival at the hospital and the other male applicant died at Minna General Hospital.”

He also said that four other males were equally treated and discharged, while seven other females applicants are currently receiving treatment for their injuries at the hospital.

The Niger State Controller of Immigration Service, Ezekiel S. Kaura confirmed that 11,000 candidates sat for the recruitment examination in Minna centre but said that five collapsed as a result stampeded and were rushed to the hospital.