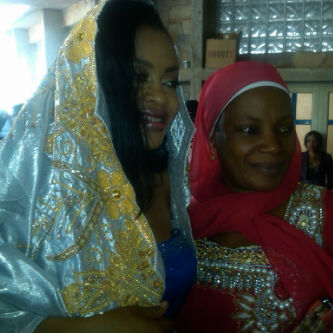 Photo from her secret wedding

July 9, 2014 – Nkiru Sylvanus Is A 2nd Wife To A Married Man..Why Is She Denying Her Secret Wedding?

Nollywood actress-turned politician Nkiru Sylvanus has spoken up for the third time since her appointment termination in Governor Okorocha’s cabinet.

The light skinned movie star said being a second wife of a married man is no issue at all .

Read what she said in a recent interview on Channel TV :

”If the situation and the person is good, I would go for it. It all depends on what I feel for the man but if he is the right person for me, even if he is married, I will accept his proposal”.

Contrary to all her yeye media talk, this lady is already married to a married man. She got married to Vice President aide as his second wife sometimes last year.

Though she had denied, sources close to her insisted that she is Mallam Umar Sani’s second wife.

Guess she is denying it because of the shame attached to it.

Omisore Thinks Aregbesola Might Beat Him Up During Debate
2015 Reelection Agenda: Why Is President Jonathan Changing Ministers Like Clothes