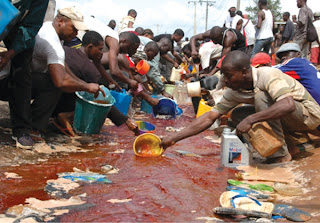 Several vandals who attacked an NNPC pipeline at Tarkwa Bay Beach in Lagos have died.

The oil spillage on the pipeline attracted hundreds of vandals who came to the scene with jerry cans to scoop fuel when the explosion occurred.

Residents ascribed the explosion to greed on the part of vandals who drill holes on exposed pipelines to scoop fuel.

Though, supply valves have since been shut down to stop the fire, security men were making efforts to track down either the victims or fleeing members.