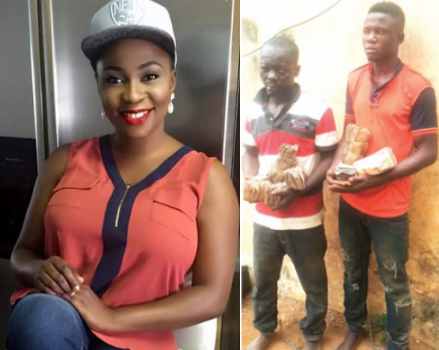 Two of the kidnappers who abducted teachers and students at a Turkish school in Isheri Ogun state few days ago have confessed to police how one of their accomplices killed Stand up Nigeria TV Presenter, Nollywood actress Aisha Alli Balogun last year.

Ayeomi and Alex (pictured above) were arrested by operatives of the Inspector- General of Police Special Intelligence Response Team (IRT), led by Assistant Commissioner of Police, Mr. Abba Kyari. A police source said: “The two suspects were arrested as they stepped out of the creek, in order to proceed to Ondo State.

Ayeomi and Alex confessed that they were behind the December 2016 killing of a popular Comedy Show presenter, Stand Up Nigeria, Aisha Ali-Balogun. Ali-Balogun’s two-year-old daughter and six others were abducted by the gunmen, who stormed Ikorodu Road, clad in military uniforms.

“I came to Lagos and joined kidnapping in 2016.

One of my friends, Austin, invited me to join. We worked with Stone, commander of our camp. Stone works under Ossy. Ossy is our overall boss. We have 38 rifles in our camp, at Ajegunle area of Ikorodu. We were seven who went for the operation. We divided ourselves into three.

“The first group was in the front, second in the middle and the third, behind. It was people in the front that killed people. My gang leader, American, was the person that killed the television presenter.

He said that he flagged the woman down; she was with a man and two children in her car. The man ran out of the car with the children. The woman attempted to drive off the car, he shot her. He abducted her daughter. He said the woman almost killed him before he shot her. “Stone, who is the leader of the camp, was not happy with the killing.

We kidnapped six persons, including the woman’s two-year-old daughter. A ransom of N2 million was paid before they were released.

A man, who claimed to be the woman’s husband, paid us N500,000 before we released the two-year old girl. “The other victims paid us N1.5 million.