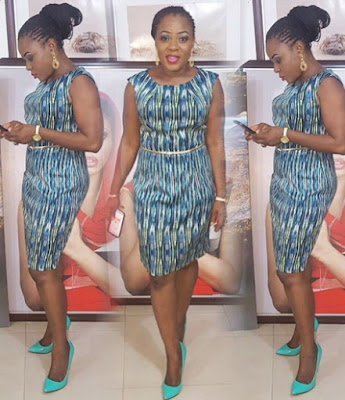 Earlier this week, popular Togolese-Yoruba actress, Liz Da-Silva shared a photo of her new buys – a pair of Christian Louboutin shoes and Chanel bag via Instagram.

Shortly after she posted the photo, some of her fans took her on saying that the shoes were fake and that she should delete the picture.

A couple of hours later, Liz responded to all the comments saying that she will never buy original shoes since she’s going to use them to walk.

“When aiye is not seriously doing me from TOGO why on earth would I buy REAL ORIGINAL shoe that I LIZDASILVA will step on ground!!! KO JOOOO, (WHEN IT’S NOT GOLD) all in the name of class? I wear/carry copied shoes/bags and 99.9% of sensible human around the WORLD does for crying out loud, what matters most to me is FITNESS (1). if you dnt like the shoe biko jump inside lagoon + make sure you LOCATE the middle as in the deepest area to enable hungry FISHES receive you without you suffering much, (2). LAGOS/IBADAN EXPRESS needs some paintings as JULIUS BERGER workers are still @ duty, YOU GET OPTION so change your ways and spend the coin in your acct WISELY!!! I no be Omo DANGOTE/OTEDOLA, I KNOW WHERE AM COMING FROM’.”

Telling your fans to go and jump inside lagoon…. Isn’t that a big too much…Naija celebrities self..