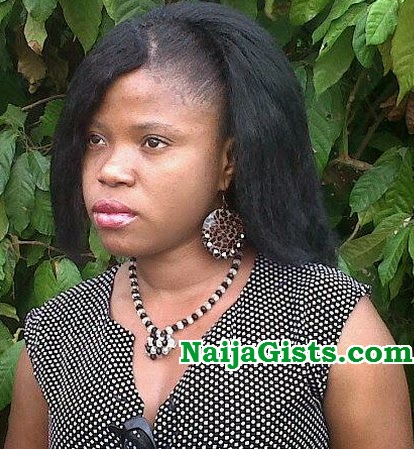 April 25, 2015 – Nigerian Actress Mary Adufe Laments: Producers Not Giving Me Roles Because I Didn’t Sleep With Them

What are the challenges you have faced in the industry?

To be honest, it has been tough since I joined the movie industry. I go through different challenges every day. I was working for Yinka Quadri as a secretary when I started out but I resigned because I didn’t get any job satisfaction. I decided to be on my own but it has not been rosy at all. Some of the so-called directors and producers are very funny. When they call you to feature in their movies, what they really want is to have sex with you. A few of them that do such are even bold enough to tell you that they love you and would make you a star when they are not God. The most annoying one that happened to me was with a production manager of a popular soap opera.

I don’t want to mention the name of the soap opera and the production manager. Somebody introduced me to the person on the phone and when he called me, he said somebody told him about me that I am a good actress. I really appreciated it and thanked him. Then the next question he asked me was whether I was a pretty and tall person needed for a role. I told him he would find out when we saw. Sincerely, when he saw me, he was very happy and said I was perfect for the role. He behaved nicely to me at the beginning and I started playing the role at the location of the soap opera. Suddenly he just changed towards me. He called me and said he gave me the role because of the love he had for me. I was totally disoriented. This was someone I’d newly met and was talking about love. Then I begged him to see me as his sister. He didn’t even allow me to finish the sentence before he said he would recognise his own sister and that he was in love with me. Till I left the location that day, this man didn’t bother to talk to me even though I begged him that I could not have sex with him. When they were shooting the next episode which I was supposed to continue, he didn’t bother to call me. He called another girl to play the role and I am very sure the girl accepted his offer before he gave her the role.

Are you really saying such a thing happens in your industry?

Yes, it still happens and it is indeed a serious and terrible situation. I don’t just know what they derive in it.

What other challenges have you faced besides sexual harassment?

A lot. Sometimes, a producer will call you to his location and after working for them, they will not give you transport fare, not to talk of paying for the job you did for them .They do that only to the up-and-coming actors. Ironically, if the young actors want to shoot a movie and they call the established acts to feature in their movie, they charge outrageously without thinking about how they don’t pay when they invite us to their own location. It is very sad and bad.

When I wanted to shoot Sisi Ferrari, I called a very popular guy through whom I came to the industry, if you know the amount he said he would collect for just four scenes, you would call him a heartless actor. In fact, they are not encouraging the up-and-coming actors. They want to be there forever but they forget that life is turn by turn. When your time expires, you will leave the post.