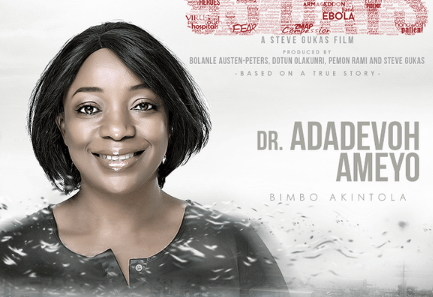 The movie that puts a spotlight on the popular Ebola virus that rocked Nigeria few years ago and the lives it took recently hit Nigerian cinemas and was received by movie enthusiasts who have been waiting all along.

One would have thought it would be a dark movie considering how dark and devastating Ebola was but it turned out to be a feel-good movie, so good that celebrities who don’t have the habit of giving public praise have been hailing the movie; the likes of Omoni Oboli, Uche Jombo, Chioma Akpotha, Ufuoma McDermott and others.

The movie which was released September 16 has been selling out cinema halls all over the country. The cinema figure is not immediately available but the headcount at different halls suggests a very strong opening weekend` for the movie.

93 Days is based on the true story of men and women who risked their lives and made sacrifices to save Nigerians from the the outbreak of the deadly Ebola virus. The epic docu-drama was also premiered at the
just held Toronto International Film Festival (TIFF).

Part of the movie was shot at the First Consultant Hospital in Obalende, Lagos which used to be the hospital where the late Dr. Ameyo Adadevoh used to work. The movie which brought together the finest of Hollywood and Nollywood has been referred to many as a ‘complete movie’ owing to the level of acting portrayed in the movie.