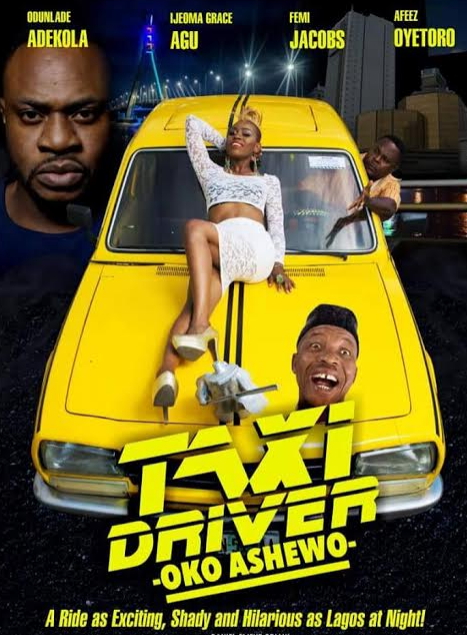 Taxi driver (OkoAshawo) is the story of Adigun (Femi Jacobs) as he comes to the busy city of Lagos for the first time to claim an inheritance left to him by his late father who absconded years ago and is coached on survival by his old friend Baba T (OdunladeAdekola). This thrilling story of murder, promises made, betrayal, crime and love is spiced with eccentric comic relief and interwoven in a blanket of mystery.

This one of a kind movie set in the city of Lagos is mainly shot on the streets portraying the everyday hustles and bustles Lagos city drivers go through and the life style choices young ladies make in order to make ends meet. Each scene breaks through into the next and the synergy of the casts is absolutely amazing as each portray their part with accuracy.

Femi Jacobs(Adigun)flawlessly delves into his role as the newbie Taxi driver doing his best to survive through the harsh realities of Lagos state. Delia portrayed by Ijeoma Grace Agu brings her character to life as she effortlessly plays the prostitute. Hafiz Oyetoro a.k.a Saka who portrays the part of the dreaded Kankanfo, as always, did not disappoint as he delivered his role with utmost professionalism. The script in itself is extraordinary as the dialogue is consistent with everyday Lagos ‘street’ lingo and the sound tracks fused well with the theme of the movie.

Daniel Emeka Oriahi proved to be an excellent director as the sound quality, picture quality and the setting of the movie make you forget you are seeing a fictional work and draws you into the plot as he takes you around the city of Lagos exhibiting the city’s beautiful night life. What sets TAXI DRIVER (OkoAshawo) from other Nollywood movies, is it realism and down-earthedness that it showcases to its viewers, entertaining them while educating them as well. The comic relief is very well timed and you will definitely be glad to have spent your time and money watching it.

If you are expecting to see a basic run of the mill Nollywood movie, I am sorry to disappoint you. This movie gives you much more than what we are used to on the local scene. There are times when a few scenes seem to be over drawn but it all adds to the beauty of the whole movie. It is a must watch for everyone and it will definitely leave you thrilled.