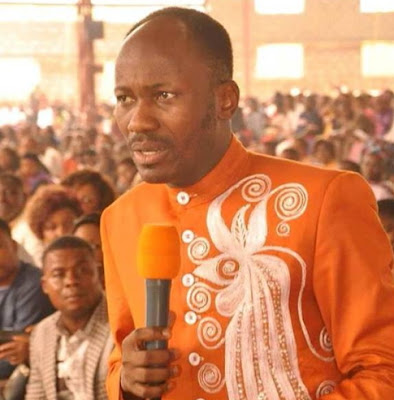 Mr. Mezie, who claimed he miraculously recovered from a kidney ailment last year, reiterated the cleric’s role in his recovery process.

He also added that the cleric sent him N8 million to offset his medical bills even though he had never met him in person.

Auchi, the hitherto sleepy town in Edo State where Mr. Suleman’s church is located, is a mecca of sort for politicians, captains of industry and Nollywood actors. But, none of them has defended the controversial Apostle.

Mr. Mezie wrote on Instagram, “His (Mr. Suleman’s) generosity and act of giving will not kill him or put him in trouble. Not one million Stephanie Otobos will stop him because it is his call to service. Finally, I will rather not curse Stephanie Otobo but I will pray for her that the good Lord will show her mercy in Jesus name. Amen.

“He was also constantly checking on me and even sent members of his church in UK to always check up on me – Pastor Ejiro and Pastor Daniella Williams to mention but a few. Immediately I returned, I went to see him to thank him.

“So saying why must he send money to someone he hasn’t seen doesn’t make sense. Apostle (Suleman) maybe friendly and extremely jovial but will never ever take indecent pictures or with anybody, as this Stephenie Otobo is claiming”.

On her part, Ms. Onuoha chastised her colleagues actors who are beneficiaries of Mr. Suleman’s ‘goodness’ and ‘kindness’ but are maintaining pin drop silence.

“Where are all the Nollywood beneficiaries of this preacher? We all see your pictures with him. You all are now radio silence? May God have mercy on us all and may God heal all involved in this.

Majority of our colleagues Male and Female are benefactors of this man’s goodness and kindness. Go through his events and videos you will see almost all of Nollywood around him. He is known for blessing actors with cars and starting business for them.

“He is a friend to majority of us including me. Majority of Nollywood players travel to his events home and abroad, people stalk him in towns and hotels wherever he lodges to preach or pray asking for prayers and help. He has supported majority of us. Seeing all these makes my heart bleed,” Ms. Onuoha wrote.

Meanwhile the two failed to garner support for one of their own, Daniella, who was recently romantically linked to the cleric who is popularly known as God’s Oracle.

Mr. Suleman has since denied having a relationship with Miss Otobo.

But he is yet to deny knowing Daniella Okeke.

An insider just revealed why the Omega Fireman will never deny his relationship with Daniella Okeke.

Will bring you the exclusive update soon.