In a desperate bid to not own up to the sexual abuse allegation brought against him by some of his victims, the founder of Omega Fire Ministries in Edo state, Johnson Suleman has blamed the governor of Kaduna state.

In a statement issued in Abuja yesterday, the Pastor through his spokesman, Shaibu Phrank said investigations pointed to Kaduna Governor as the man behind his sex scandal. 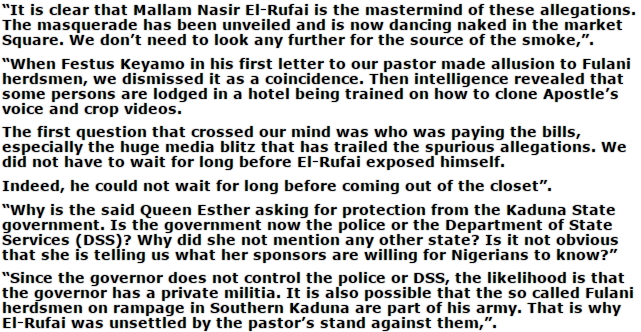 If El-Rufai was the one sponsoring the faceless Esther, then who is sponsoring Stephanie Otobo and Daniella Okeke?

Are we to blame El-rufai for putting Apostle Suleman’s name on Daniella Okeke’s $76,000 car registration documents???

These and many more question need clarification.

Apostle Suleman who is well respected by his followers should come straight to take his stand against all these accusations if he’s truly innocent.

Why didn’t he distance himself from Daniella Okeke????  His silence on this matter is an acceptance of the fact that he has an ongoing relationship with the alleged Nollywood prostitute .