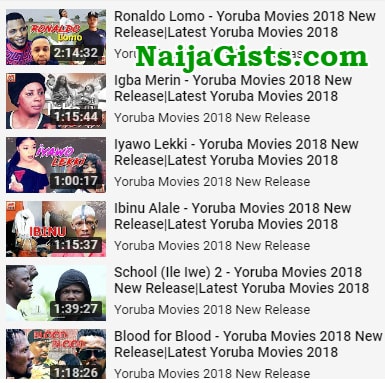 A new campaign tagged #youtubepiracymuststop aimed at  tackling  the pirates was started by US-based actress Mistura Asunramu yesterday.  She urged her colleagues to support the campaign and fight piracy.

“I have noticed that our movies no longer have values on YouTube because of some bad stations,” she said.

“We are not done with DVD piracy which has actually disorganized the industry yet you bring it on the only platform we depend on for now. Whereby you put old movies which you never paid for and use a new picture we post on IG and even use the titles of the trending movies then also put an old film as Part 2 for a trending movie.

“My recent movie ‘Wicked Soul’ is on Apata TV, but any mistake of pressing the title you will see like four films with the same title and picture of the same cast. This is not encouraging because even YouTube tend to be giving advert to all the bad movies they have about 200 stations both for Yoruba and English movies. Please let’s keep flagging them if we can or repost if you are affected. This must stop.

“Let Nollywood artist eat the fruit of their labour, we spend our hard earned money to produce our movies and we do a lot of promo to keep our titles; top diminishing us, stop misrepresenting us, let’s live our life.”

Another actress Yewande Adekoya said the pirates have dropped earning of filmmakers using this new trick.

“They even go as far as stealing poster designs of these latest trending movies and label these movies with names of actors that are not even in the movie at all just to pull traffic.”

“Please don’t spoil the YouTube business for everyone. Stop using fake cast list, stop stealing other people’s movie titles, poster designs e. t. c. You might think the trick is pulling traffic for you now, but at the end of the day, the channel will lose its credibility and all your viewers and subscribers will migrate to a more credible channel.

Please stop shooting yourself in the foot, don’t spoil the YouTube business for those who are credible and are interested in serving their viewers with top quality entertainment. Stop irritating YouTube Yoruba movie lovers with all these lies and deceit. You are killing Nollywood if you are one of those doing this.”