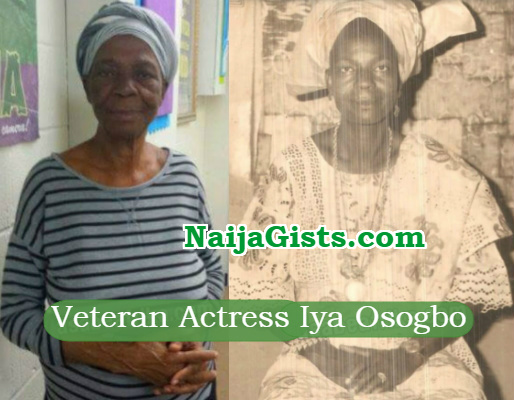 85-year-old Nollywood actress Grace Oyin Adejobi, the eldest wife of Oyin Adejobi talked about her life, acting career and the secret of her longevity in this recent chat with Femi Akinsola.

Tell Us About Your Family Background

I am Grace Oyin Adejobi otherwise called Iya Osogbo. I was born in Osogbo, Osun State, in August 1931. My father was a contractor and he spoke many languages. He was an educated man and wrote down the birth dates of all his children. My father had three wives and my mother was the second wife. My mother, who was a trader bore five children and only three of us are still alive.

I attended All Saints School, Osogbo. In the past, education was important like it is today but not all parents gave it much attention as it is nowadays. My parents were not too keen about it so when I left school after studying up to Standard Four, I learnt cloth designing. When I completed learning as an apprentice, I opened a tailoring shop where I employed some apprentices. The shop ran for sometime before I closed it. I decided to close the shop after five years because we were not making much profit.

We could sew a woman’s traditional attire for six shillings. The only thing was that the money had value. My mother had traveled to Ghana on a business trip and I was staying with my maternal grandmother. It was not long after that I got married.

How Did You Meet Your Husband Oyin Adejobi

My husband was the late theatre guru, Oyin Adejobi. We both stayed in Osogbo and had known ourselves for a long time before we got married. He was also our choirmaster at an Anglican Church in Osogbo. We both attended the same school and he was my senior by many years. We both knew each other’s parents.

It was when he traveled to Lagos with his brother who was a primate that he learnt many things about theatre. He was good at playing the piano while he was in Osogbo. We did not have any plan to get married when he was in Lagos but it was when he returned that we started an affair. We were close even when he traveled to Lagos. When he came, we continued with our relationship as friends. At the time, people usually made enquiries about the family one wanted to marry into. It was not like today that people get married without making findings about the families of their spouses. There was also an intermediary who served as a go-between. We had one too despite the fact that my husband and I had known each other for a long time. My husband was from a good family. Notwithstanding that, I could not just jump at his proposal. We were not even allowed to visit our would-be husbands’ houses until the marriage rites were done.

We did not have a formal wedding ceremony. But members of the two families met and had a ceremony. It was a great day for the two families. Unlike nowadays, families back then cherished their daughters being virgins. Though l was twenty- five when l married to him, l kept my pride and it was a celebration galore because my parents received bountiful gifts from their in laws. It built thrust and strengthened the love between us. I remember it affectionately.

When Did You Start Your Acting Career

It was in Osogbo in 1952 that it all began. We had only two males with us at the time. Females were scarce in acting then because people perceived actresses as prostitutes. We also did many shows in Jebba, Kwara State. Back then my husband paid performers One Kobo. lt was in Jebba that he increased it to 2kobo per day for meals. It was a huge amount of money then. Every festive period we traveled round the country to perform. We drew a lot of crowds because many people liked Oyin Adejobi’s kind of performances. In those days it was believed that only unserious people embraced acting. Many parents did not allow their children to go into theatre but today the situation has changed.

My interest in theatre

I imbibed the spirit of theatre at a tender age. My love for acting started when I was in school. I was a very popular pupil in my school’s drama society. Anytime there was a cultural event I always played a lead role. I love acting. It is in me; my teachers loved me so much having disovered that talent in me, they encouraged me.

Why I Married Oyin Adejobi

I told you that he was a very responsible man and from a good home. He had few friends but was close to some people like the late dramatist, Kola Ogunmola.

My first appearance on stage

All our plays are memorable. You have to watch them to agree with me. The storyline is always interesting and the messages deep. My first participation in the production of the group was in 1953 at the Billiard Room in Osogbo when we acted Paradise Lost. On that day, my husband lit the corners of the room with local lamps for illumination. The audience was huge that day. His theatre business was so broad that we sometimes traveled across many states to record episodes of any play we were working on.

What Is Your View Of Polygamy

He really was not someone who liked polygamy. But his work made him marry about four more wives. There were some women that came into the group only for acting but they were different from the ones he married. l so much loved Oyin I did not react in anyway bad because I supported his decision from the beginning. All his wives participated in the productions. We all traveled with him across the states. At that time, the likes of Kareem Adepoju (Baba Wande), Eda Onileola, Kola Oyewo among host of others were with him and performed active roles in Paradise Lost, Kuye, Orogun Adedigba and others. We did not produce many films because most of the productions were stage plays.

Each time l remember it l feel sad. ‘Orogun Adedigba’ is the life story of my late husband. It chronicles how he started using crutches at age seven. That was not how he was born. It is not possible for anybody to now say that it was a story he wanted to use as a play. I do not want to hear of that.

The Secret Of My Youthful looks

The secret is God. He is the giver of life and peace. Besides, l don’t put unnecessary burden on my heart. I am contended with what God has done for me.

My experience with my fans

My children do not allow me to trek or take public buses. But there was a time I decided to take a walk from where I stay in Ibadan, Oyo State, to an area in Mokola. I had not walked up to 10 minutes when a man driving a sleek sport utility vehicle moved towards me. I was scared and nearly fell into the gutter close by. He must have seen the fear in my eyes so he quickly stopped the vehicle and beckoned on me in a friendly manner. I waited as he alighted, saying ‘‘Please ma, do not be annoyed. I was too happy to see you. Are you Iya Osogbo?’’

I answered in the affirmative and he smiled broadly. It was a time when the news was all over that ritual killers were on the prowl. He gave me some money and I retreated but he begged me to accept it that he was one of my fans. I collected the money and when he offered to give me a ride I told him I was just taking a walk. I was scared till I got home because of the money he gave me.

You know. my husband ran a television series called Kootu Asipa (Ashipa Court). The nickname came from there. Some people started calling us the names we used in some plays which many of us did not like. We complained to my husband and he used an episode in the series to stage a play in which punishment is meted out to anybody who calls another a name he or she does not like. He later asked us the name we wanted to bear in plays and I said Lagbenjo Iya Osogbo. Kareem Adepoju said Baba Wande and Alabi Yellow chose Alabi Yellow.

Old Age: Why I Quit Acting

I am no longer young. I do not have the strength to be hopping from one location to the other. I acted in many films after the death of my husband. I can no longer act in cultural plays. Even when my husband was alive, we mostly used the Bible in our plays. Our theatre group didn’t know how to use incantations in plays.