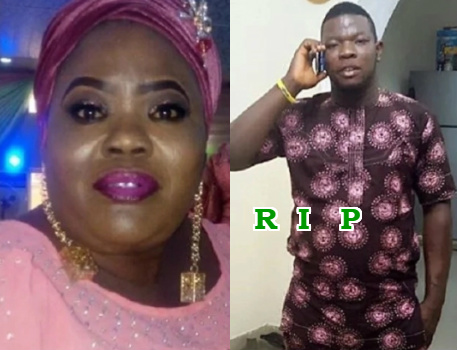 Popular Abeokuta-based Nollywood actress who lost her son 2 months after the death of her husband has granted her first interview of the year.

Adeniyi was playing football when he suddenly collapsed and died at age 28.

The grieving mother shared her pains and experience with Bunmi Mustapha of City People Magazine in this interview.

Can you tell our readers about your late son?

He was my only child, I had my son, Abdullateef Adeniyi Ishola Adetomi on January 20th 1988, on a Wednesday to be precise. He had his primary and secondary education and later went for nursing.

After his nursing course, he went to Lagos to start working. Four months in Lagos, my sister whom he was staying with, who also got him the job, told me that Niyi was not feeling fine.

She said she had got drugs for him, but he had not improved, so I told her to bring her to Abeokuta for proper care. When he got to Abeokuta, I asked him if the job he was doing was too much, he said no.

I raised the question as I was wondering why someone at the age of twenty 8 would have high blood pressure. At the end of the day, I took him to a hospital and he was well taken care of.

As Ramadan period was close, the doctor warned and begged me not to let him participate in fasting at all, that his health was good enough for fasting, so he went back to Lagos. He didn’t fast, but three days after the beginning of fasting, which was on the 5th of June, I was called from Lagos that he went to play football and fell down, he was rushed to the hospital, later died, it was at General Hospital, Igando road, Lagos.

Was he medically okay and fit before he went back to Lagos?

He was fine, nothing was wrong with him anymore, but I asked him not to start work immediately when he gets to Lagos, so he could rest more, my sister told me she was going out to break her fast in a big sister’s place and Niyi was the one who opened the gate for her and he went with a friend to a nearby football pitch in the area, I was told he didn’t play football at first he was just watching, but when one of the players stepped out, he replaced him, it was not up to 20mins that fell and they were making fun of him falling down few minutes after he entered the field not knowing it was something very serious, he tried to stand up again, but fell again, that was when they knew he was in trouble and they had to call people to take him to the hospital.

When his BP was checked, it was 260/70. What I observe is that the BP issue is from his dad’s family, because two months after my son died, his dad died too, and it was the case of high BP, his dad was Sakiru Adetomi, he died two months after his son’s death and medical report says he had high blood pressure just as his son, I was also told his grandfather died of the same high blood pressure.

Before he took ill, did he show any sign of him not feeling well probably in the past?

No, he didn’t, and my son was calm and cool headed, he doesn’t socialize, he doesn’t talk too much or have too many friends, it was hard for me to even know his girlfriend. It took so much pressure before I knew who he was dating at age twenty-seven.

It was later he brought a girl to me. Her name is Maryam, it was after that he relocated to Lagos where my sister got him a job in a hospital. Everyone, who knew Niyi knows that he was a reserved person.

Some people even asked him if I was truly his mother because he was very gentle.

How did you receive the news?

What happened was that, no one could summon the courage to tell me directly, that day, I was in my friend’s shop when my sister called me that Niyi was not feeling fine that I should come to Lagos.

I asked her take care of him, reminding her if I was not in the country, and she said she would take him to the hospital, but as a mother, I could not just hold on anymore, I told my friend, I was going to Lagos to see my son.

When I got to new bridge and was looking for a Lagos bus, one man came and told me that its late that I wouldn’t get. In the morning, he took me on a bike accompanied to me home.

By the time I got home, I didn’t see anyone. It appeared people were avoiding me, that was when my instinct went to my son being sick in Lagos.

My immediate sister was not settled, she kept asking me if I wanted to drink tea, I said ‘no’, She told me she was going to get the tea, when she got back, I asked for the tea she went to buy, she told me the woman was too rude to her.

At that point, I was feeling heat within and decided to sit outside for fresh air.

Some boys came to meet me and asked after my sister, I asked them what was wrong and they said they were told Niyi was sick and that was when I started crying, I later saw my aunt, it had been four months since I saw her , but she just greeted me and walked away, I didn’t know that people were around houses and in the bush, I could not see them because there was no light, but no one was bold enough to tell me what had happened.

All of a sudden, I saw a pastor, who was very close to my mother before she died. He was with some people and he requested they talk to me inside, he started praying, and when he was done, I told him not to tell me anything, I told him I have seen signs that my son was dead.

I’m an actress, I also suspect things. I knelt down immediately and stretch my hands to God, I said God I knew you do everything for a reason, I don’t know why you decided to test my faith this way, but I can’t question you, you took my only son from me, thank you God, I told everyone I won’t cry, but they should give me few hours alone, I went inside the room, I cried, I prayed, Niyi’s corpse has been brought to Abeokuta that same night, but they didn’t allow me to see him.

I begged them to let me see my son’s corpse, because if I don’t see him, Niyi has punished me, wicked me, but there was nothing I can do, I give thanks to God everyday though.

I was later taken to Lagos, but when I saw it on Facebook, it was sad, people started calling me, but there was nothing I could say or do, but I kept on giving thanks to God because he knows best. I was on my way out one day and I saw some two kids playing.

I don’t know them, one is like five and the other like seven years old, and they called me and asked when would I give birth because they want to come and eat at my naming ceremony, I teased him and asked if I am going to have a baby, he said yes, two big babies, I just gave them money and left, since then I have not seen those kids again.

I will be fifty years, next year but I believe there is nothing too hard for God to do, no day pass by and I won’t think of my son, but I keep thanking God, some people even asked me to go and adopt a child, I said I don’t know what God has in plan for me for this huge test of taking my son, maybe I won’t serve him again or I will keep praising him.

Last year, I was suppose to go to America, but because I was telling God I can’t leave my son, Niyi is not familiar with anyone, my mom and dad are dead, and Niyi doesn’t know how to visit people, he comes home after work, that was why I didn’t go America last year, I wanted a visa for my son, but God decided to grant him his visa.

Have you been going to location after the death of your son?

Not at all, I just go out with my friends once in a while, I am just taking my time, although I have a job already this month, but my fear is people who have not seen me since then and coming to greet me, like the day to do something in Ibadan and I went to a location, I saw Iya Awero, Iya Rainbow Madam Saje and the likes, they came to great me in the hotel I was and they were crying, and they were talking about their encounter with my son and how humble and gentle he was.