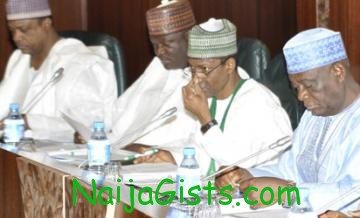 The world may pardon us for taking tough but necessary decisions and making all the mistakes but the world will frown at us when we take no decisions at all in times of crisis. Good leaders do not allow grasses to grow under their feet but they take decisions with frightening speed to checkmate a big problem. naijagists.com

Good leaders take tough but intelligent decisions when the needs arise. They do not run away from problems but face problems with courage and determination.

I have just read this morning, Sunday March 11, 2012 that prominent leaders in the North led by IBB, Abdulsalami, Atiku, Adamu Ciroma, Alhaji Maitama Sule and others met in Abuja yesterday to put heads together on the repeated insecurity problems in the North occasioned by the Boko Haram threats to the corporate existence of Nigeria. In my three-part articles titled ‘WAR IS IMMINENT IN NIGERIA BUT GOD FORBID’ I have challenged Northern leaders that it is unholy and unacceptable that under their noses, the Boko Haram elements have killed almost a thousand Nigerians and no word seems to be coming from them. I remember I challenged the Northern leaders that wars do not recognize any face or body and I thank GOD that Alhaji Maitama Sule captured it well when he said that “Nobody will escape if there is trouble in the North or Nigeria”. I have reminded Northern leaders that curses come to a nation when leadership is left in the hands of Children. I told them that when elders are not at home, children may wear snakes as necklaces. I have challenged Northern leaders to know that no section of this country has a monopoly of violence. But now that the Northern Elders have found the need to intervene, one cannot but wish them well even though it is belated. The damage had been done! But if this is a genuine mission to rescue anything that must be rescued to save Nigeria from imminent collapse, I support it with all my strength, energy and everything at my disposal.

The attack on the Police headquarters in Abuja, the attack on a catholic church in Madalla, Suleja, the attack on the United Nations in Abuja,the killings of Mubi 13, the brutal murder in a church in Jos, the killings of a Briton and an Italian recently and other mass murder in Northern Nigeria is an indictment on Northern leaders. The assault on the corporate existence of Nigeria and the myopic reasons advanced for such primitive attacks remain an embarrassment to the leadership in North and a mockery to the seat of Government in Abuja.

They go extra mile to get justice and I am sure this one will not be an exception.

The Northern leaders should know by now that the gap between South and the Northern Nigeria is getting wider and this portends grave danger. I insist that we are better united in this country but it is not going to be sustained by the sacred blood of innocent Nigerians.

It is on record that Northern leaders led by Alhaji Adamu Ciroma promised to make Nigeria ungovernable if Jonathan wins the 2011 Presidential elections and now the chicken has come home to roost. This war being pushed by some leaders in the North may consume Nigeria but God forbid! (By Joe Igbokwe)