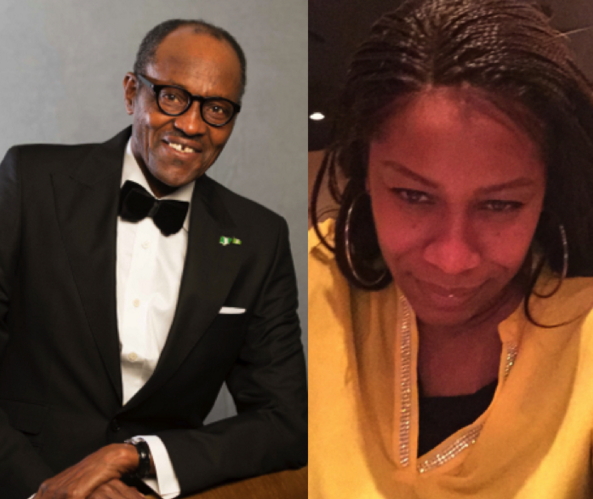 Judging a President from outside Nigeria without recourse to several indices in recent months is the height of blackmail and injustice to Nigerians in particular and for the avoidance of doubt here is the CHANGE PMB promised Nigerians.

Without mincing words, we now have a country where stealing would now be regarded as corruption unlike in the past. We now have a brand new Nigeria where people are conscious of Nigeria than anything else and this explains why people like Regina Askia could suddenly realise to draw Mr. President attention, but it is a big shame her likes where comfortable with all the atrocities of Jonathan led-administration.

Nigeria without doubt is the most populous black Nation in the world, so endowed with mineral and human resources that many countries wished it is their’s to manage. It is interesting to note that Nigerian can boast of every other thing in this world except that of quality and purposeful leadership but all that is beginning to CHANGE within nine (9) months of PMB’s ascendancy. To us this is CHANGE.

Up until now Nigeria is synonymous with corruption, a subject of mockery, despise upon with disdain and at best its citizenry is treated as the worst criminal around the globe but today Nigerians are accorded with high measure of courtesy just because they now have a President whose trademark is that of integrity, this we call CHANGE.

Before her early sojourn abroad we used to watch Regina Askia as talented actor yet controversial in her own right, whose lifestyle fall short of moral standard for emulation, especially in a decent African tradition where decency remains the order of the day. Sadly, she is yet to become a role model and to think she had learnt her past mistake in order to embrace a Nigeria built on moral and ethical standards is to say the least.

On a lighter note, how I wished Regina Askia lives permanently in Nigeria as I would have love to take her out to one of the happening joints in Calabar to see for herself how girls complain of poor patronage because of low turn-out of men at night. At least, this has helped cement relationships and marriages in several homes as men now stay-put at night with their wives while pretty ladies now become born-again individuals. To us this is CHANGE as ill-gotten wealth encourages immorality at its peak.

Nigeria no longer operate criminal-minded economy where Nigerians are cajoled and made to believe all is well yet selected few individuals polluted our economy with looted money meant for the general well-being. To us this is what we call CHANGE.

Transparency in the way and manner this administration handle things remains a model for the rest of the world even when they don’t open up we are certain they are loving it. Whilst, the revelation of Treasury Single Account (TSA) is enough pointer that CHANGE is at work as this exercise fetched Nigeria a whooping sum of N2.3 trillion, unlike in the past where this money would have being looted long before you knew it. To us this is CHANGE.

Up until now the audacity with which Boko Haram operated is one that has reduced Nigerian security apparatus to mere security guards but today Nigeria army in particular has completely wipe -out Boko Haram from their enclaves, leaving their remnant for the world to see.

To us this is CHANGE. At least for relegating these ragtag lunatics to nothing. Let’s us not forget in a hurry that Boko Haram celebrated every Friday and Sunday with bombs. Whereas, those behind this heinous crime against Nigerians are facing the jazz of the law and we pray and hope they all wrath in jail.

Nigeria at the moment is passing through a trying period of its economic life and with the collapse of crude oil price at International market there is little any government can do other than looking inward (diversification). To every sincere Nigeria this government is committed to that as the battle of supremacy between Naira and Dollar is an indication that the more we rely on imported goods the more we suffer as a Nation. Today we can boldly say that Nigerians glutonic quest and penchant for foreign taste is beginning to suffer a heavy setback which to us is what we call CHANGE.

It is high time we patronised made in Nigeria especially Aba made products and do away with what we can not produce as a Nation. Our locally grown foods remains the best with its medicinal values in comparison with chemically imported foreign foods endowed with cancerous recipes that often resulted to medical tourism abroad. We are pretty sure that the era of spending billions of Naira inform of capital flight on imported Brazilian hair, Peruvian hair, Bulgarian hair, eye lashes, finger nails and skimpy dresses in the name of fashion would soon be over. Come to think of it Nigerian ladies remains the most beautiful in the world if only their natural look are preserved.

Most Nigerians thrives on pure hypocracy and sycophancy with sectional, religious and political inclination as this explains why our leaders treat us with levity. Today everybody in Nigeria is an activists or social critics of some sort not just because of social media evolution but because the system is transparent enough for one to see and to us we call this CHANGE. Until we began to have faith in the Nigerian project that CHANGE is here to stay and in no way should we ever return to our old ways of doing things, we may not appreciate this solid foundation meticulously being crafted by his Excellency PMB.

Every Nation is with its own peculiar challenges and PMB is not that President that pretend such never exist, his tour around the globe for assistance and collaboration justifies that. Moreover, advising President on National issues is a task of every patriotic Nigerian. Thus, those criticising should as well advise him on the way forward as we believe once you do that Nigeria would be good for it. We should equally learn to pray for his Excellency and Nigeria to succeed, as well be proud of it other than raining curses on it at a slight provocation. There can never be another Nigeria except this one, as American would say God bless America.

It is impossible for us as an individual to continue to preach hates speeches abuse our leaders and expect kidnapping, communal clashes, other social vices to just go away but rather preach love and encourage one another.