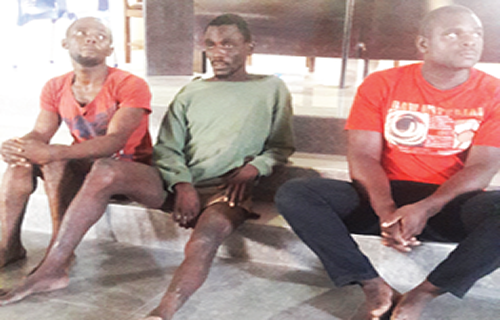 3-man criminal gang members have told the police in Akwa Ibom State that they could not remember the number of women they had raped. The suspects specialised in going round Uyo metropolis, using a commercial tricycle to pick unsuspecting female passengers before hypnotising and raping them.

Parading members of the gang at the weekend at the State Command Headquarters, Uyo, the Police Public Relations Officer (PPRO), ASP Cordelia Nwawe, said they were apprehended by a team of Special Anti-Robbery (SARS) and State Criminal Investigation Department (SCID) following a tip-off by one of their victims.

The suspects, Utebe Archibong (29), Charles Essien (27) and James Etim (24), the PPRO said, succeeded because the victim (name withheld) said one of her abductors pretended to be a commercial tricycle rider, while the remaining two pretended to be passengers.

According to Nwawe, the victim, a University of Uyo student, while aboard the tricycle, was hypnotised and then taken to a place where she was raped several times. Thereafter, the suspects made her to swear to an oath never to reveal the incident to anyone, else she would die. But she summoned the courage and narrated her ordeal to her roommates in the hostel who advised her to report the incident to the police who swooped on the rapists.

The suspects, who confessed to the crime, said many young women had fallen prey to their pranks. The suspects said they had been raping for a very long time.