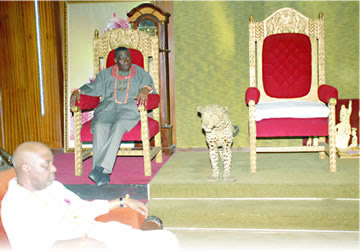 There was drama yesterday at the palace of The Monarch (Oba) of Benin when the monarch refused to publicly welcome a whole president of the Federal Republic Of Nigeria.

Oba Omo N’Oba Erediauwa declined the official visit because the gods stopped him.

President Jonathan arrived in Edo State Capital city of Benin for a rally ahead of the July 14 governorship election.

As a show of respect, he headed to the monarch’s palace.

He was made to seat for about 15 minutes next to Oba Omo N’Oba Erediauwa’s throne before a palace official announced to his delegation and the Bini chiefs that were also seated that the royal father would not be seeing him because of circumstances beyond his control.

However, the monarch’s official added that the usual palace formalities would still be observed in the absence of the monarch, including prayers for the president and the distribution of cola nuts.

According to him, “because of circumstances beyond his control, the Oba cannot receive the president, but the normal procedures of prayer for our guest will still be carried out.”

President Jonathan, who was apparently taken aback by the announcement, looked calm as he simply lowered his gaze even as the palace official invited the most senior chief present to offer the prayers.

After the prayers, the palace official, again, announced that even though the Oba would not see the president in public, he would be willing to receive him alone in another section of the palace.

It was not immediately clear whether President Jonathan, who had removed his cap in line with Bini tradition to wait for the Oba, later met the royal father alone despite security requirement which would have been against the president being alone outside the close monitoring of his body guards.

Even though, the palace did not reveal the reason for the monarch’s decision not to publicly welcome President Jonathan, sources in the palace volunteered that the traditional ruler was merely adhering to the dictates of the ‘gods’ who had made it impossible for him to appear in public to receive the president at that particular time.

Among those with the president in the palace, were

While speaking at the rally later in Ogbe Stadium Benin, President Jonathan, particularly, thanked the Esama of Benin, Chief Gabriel Igbinedion, who he referred to as a “power traditional chief,” and other traditional rulers who came to the stadium to give the PDP their royal blessings.

“Let me appreciate other traditional rulers that are here with us with the Esama of Benin for coming to give us the royal blessing,” he said.

He thanked the people of Edo State for their massive support for him before the last presidential election and assured that he would fulfil the promises he made to them during the campaign.

He specifically referred to a previous incident where the Oba of Benin refused to see former Minister of State for Works who was on official visit to Edo State on the grounds that government had done nothing about the poor state of roads in the state.

According to him, “before my election, one of my ministers, incidentally your own son, who was the Minister of State for Works, came to visit the Oba of Benin and the Oba said he didn’t want to see him because the roads are very bad.

“He got back to me and when I came for the campaign, I told the Oba, ‘don’t worry. After the election, my minister will come back.’ Luckily, the (present) Minister of Works is from Edo State.

“The last time the Minister of Works came to Edo State, when he went back, I asked him, ‘did the Oba receive you?’ He said, ‘yes, Oba even promised to send the president a gift.’

“Let me assure you, my good brothers and sisters from Edo State, that we will continue to keep faith with our electoral promises.”

President Jonathan remarked that he has used the first year of his administration to plan and strategise, but that government was now moving on.

While urging the people to vote for the PDP candidate, Major General Charles Airhiavbere, he pointed out that the “PDP is the dominant party. As long as you mobilise and vote, PDP will win.”

Edo State chairman of the Peoples Democratic Party (PDP), Chief Dan Orbih, in his welcome speech, thanked President Jonathan for the “great transformation work of his administration in Nigeria,” just as he commended him for the Universal Basic Education (UBE) projects being executed in the state.

Orbih described the ruling Action Congress of Nigeria (ACN) in the state as hypocrites who failed to practice what they preached, just as he thanked the president for being a true party man by coming to demonstrate his support for the Edo PDP and for the party’s candidate.

The state PDP, however, in an official statement, denied that the monarch did not receive the president.

Theparty said members of the ACN in the state had gone to town, shortly after President Jonathan’s visit to the Oba of Benin, before attending the PDP governorship rally, to spread what it described as “an untrue, wicked, mischievous and malicious lie” that the Benin monarch shunned the president and his entourage.

The state Publicity Secretary of the PDP, Mr. Matthew Urhoghide, in the statement issued on Saturday in Benin City, added that “at the palace, Oba Erediauwa, who, for reasons that the royal palace may explain at a later date, could not have a formal and open reception for the visiting president, most courteously invited the president to his inner sanctum where they both had a special meeting.

“The Oba’s invitation of President Jonathan into his very highly restricted bedchamber should have been seen for what it really is — a special meeting, the content and attendance of which was restricted only to the need-to-know.

“Not many non-Benin sons and daughters, in the history of the palace of the Oba of Benin, can claim to have been received in the special section where President Jonathan had audience with His Royal Majesty.

“Those who spread the wicked lie do our royal father grave wrong because Oba Erediauwa is reputed to be seeped in the observance of protocol, courtesy and decorum. A few weeks ago, he warmly received, Vice President Namadi Sambo and his entourage who were in Benin for the same reason as President Jonathan and paid a courtesy visit on him.”

The Edo PDP further said, “it is unthinkable that some people would claim that our revered royal father would openly refuse to see the President of the Federal Republic of Nigeria. Those who spin this lie should stop for a minute to think of the damage such malicious lie would do to the image of the Benin Traditional Council.

Edo PDP cannot think of any twisted advantage they calculate to win from the lie.

“We are sure that the royal palace of the Oba of Benin will, at the appropriate time, officially correct this anomaly so that the good people of Edo State will be better informed.”(Tribune)

The gods are angry, Boko Haram is angry, Niger delta youths are angry our dear president needs prayer and the help of God.