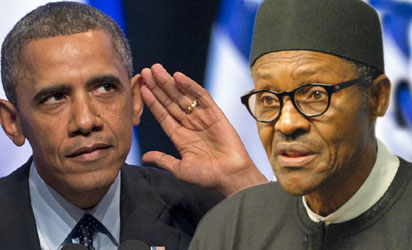 Being the first black president of the United States of America (USA), is among reasons history shall speak kindly of Barack Obama. Others include his focus and determination to accomplish what others considered impossible in their lifetime.

Foremost American civil rights activist, Rev Jesse Jackson, wept at his inauguration because of this. When you consider the indignities blacks suffer in America, Jackson’s tears provide a fresh perspective.

There are other reasons Obama is electric and shall be celebrated in American history as an uncommon phenomenon. These include Melania Trump, wife of the US Republican presidential candidate who realized too late that she had plagiarized aspects of a 2008 speech given by Michelle, Obama’s wife.

But in the most populous black nation that the US president has consistently shunned, he shall be remembered for inspiring change, a mantra that the administration of President Muhammadu Buhari is incapable of following to its logical conclusion.

If “Change begins with Me” was lifted from a previous speech by Obama, this sudden and hilarious twist is hardly surprising but it should not justify the allegation that the pet programme of the administration lacks originality as some critics have said.

The Senior Special Assistant to the President on Media, Mallam Garba Shehu should tone down his pledge to sanction the Presidency official responsible for the offensive insertion in the president’s speech because that would be counter-productive.

Even if the anonymous official is sanctioned as threatened, what happens to the person who read the speech without any clue that it lacked originality? Having discovered itself in this twist, The Presidency is in a better position to empathize with Melania Trump who has had to convince Americans that similarity of thought with Michele Obama is not sufficient to sustain the charge that she plagiarized the speech of Obama’s wife.

As powerless as Trump was to resist the infectious Obama man magic, despite the enormous political differences between them, so also change should not resist the opportunity to wow Nigerians, even when the similarity is too serious to be coincidental as Shehu admitted.

Providentially however, Obama visited the subject of his snub and provided the administration to reconsider the allegation that it is disdainful of contrary opinion, especially those adjudged politically not correct.

For example, the President of the Association of Professional Bodies of Nigeria (APBN), Mr Foluso Fasoto said the economic recession in the country would have been averted if the administration sought the advice of experts.

And a former presidential candidate, Prof Pat Utom agrees that the crash in oil price was not enough to trigger recession if the right policy choices were made by the administration. He regretted that experts became wary of offering advice after the administration ill-advisedly scared away investors with contradictory signals.