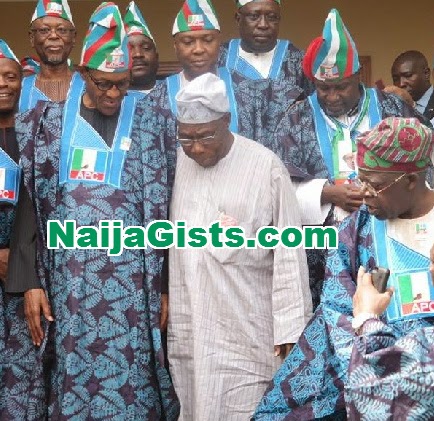 Obasanjo, a card carrying member of the ruling party, PDP made this known during an interview he granted to Financial Times during his book launch in Nairobi Kenya.

The elder stateman boldly said Buhari who ruled Nigeria from 83 to 85 is fully aware of the challenges facing Nigeria and is more than qualified to lead the country aright.

“The circumstances he (Buhari) will be working under if he wins the elections are different from the one he worked under before, where he was both the executive and the legislature – he knows that. He is smart enough. He is educated enough. He’s experienced enough. Why shouldn’t I support him?”

“It is a question of leadership – political and military. I think you need to ask Jonathan how he let the army go to this extent. Many things went wrong: recruitment went wrong; training went wrong; morale went down; motivation was not there; corruption was deeply ingrained; and welfare was bad.”

The ex-President who disagreed with the election postponement said he hopes Jonathan would bow out quietly and stop putting his selfish ambition ahead of the well being of Nigeria.

The fearless military man also warned Jonathan that any attempt to manipulate the election could lead to a coup d’etat (violent seizure of the government). Obasanjo added that May 29 handover date can not be changed.

“I sincerely hope that the President is not going for broke and saying ‘look dammit, it’s either I have it or nobody has it’. I hope that we will not have a coup. I hope we can avoid it,” he added.

Obasanjo concluded by saying that Buhari would restore the morale of the military which Jonathan has battered due to his lack of military experience.

He said GEJ betrayed the military by allowing corrupt officials to take over important operations.

Hmmmm a word they say is enough for the wise… Oga on top make u hear ooooo. These Generals don’t joke with words.

I fear for this upcoming election chei! no wonder many people are leaving Nigeria for abroad just to escape the imminent violence.

May God protect us all.