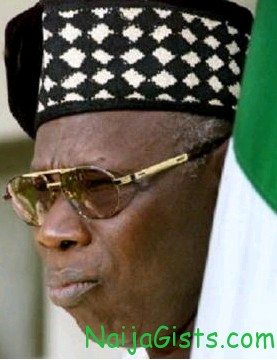 Obasanjo made this assertion while speaking at the West African regional conference on youth employment in Dakar, Senegal.

The former Owu-born warlord lamented that the unemployment situation had given birth to categories of youth involved in social crimes whom he labelled as “area boys, Yahoo boys and, recently, Blackberry boys.”

He said the danger posed by an army of unemployed youth in Nigeria can only be imagined adding that the country may witness a revolution soon unless the government takes urgent steps to check growing youth unemployment and poverty.

He said “I’m afraid, and you know I am a General. When a General says he is afraid, that means the danger ahead is real and potent.”

“There is the absence of serious, concrete, realistic, short and long term solution unemployment.”

The former military Head of State referred to the doctorate degree holders who applied for jobs as drivers at the Dangote Group, saying ”Nigerian youths have been patient enough and that this patience will soon reach its elastic limit.”

Obasanjo called for diversification of the economy saying attention should be given to agriculture business as against the usual local farming.
He stressed the need for easy access to land and micro credit, while advocating for a review of school curriculum to enable undergraduates spend additional one year to learn entrepreneurship.

The conference, sponsored by the Organization for Economic Cooperation and Development (OECD) and the African Development Bank, was attended by top bankers from across Africa including the Managing Director of Nigeria’s Bank of Industry, Ms. Evelyn Oputu.(Source: DailyPost)