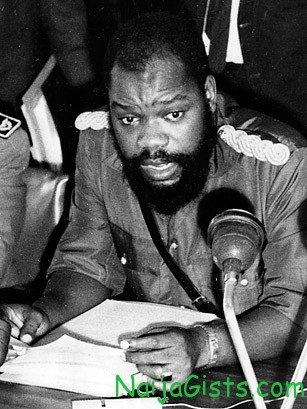 The National Chairman of All Progressive Grand Alliance,APGA, and an ally of ex-Biafran warlord, Chief Victor Umeh, has threatened to open the Pandora box on the events leading to the death of late Chief Odumegwu Ojukwu. Umeh dropped this hint while briefing newsmen on Sunday November 11 in Enugu over a recent claim that himself and Governor Rochas Okorocha shunned a peace meeting held recently in Awka, and blamed both Governor Obi and Mrs. Bianca Ojukwu for the problem in APGA.

The party chieftain, who described the claims as an attempt to dent his name and that of the Owelle of Onitsha, claimed that the late Igbo leader died as a result of heart attack from some quarters.

He then said that he would expose every fact he knows about Ojukwu’s illness and eventual death after the November 26 one year remembrance of Ojukwu. Listen to him: “Let November 26 come and go and I will expose all of their activities as they claim to be upholding the ideals of Ojukwu.

The way things are going, very soon I will start granting interviews again to put things in proper perspective both for Mrs. Bianca Ojukwu, Governor Peter Obi, Dr. Tim Menakaya; all of them that are destroying this party now; I will come back to the public with their activities; with details one after the other so that people will know what they are doing; It’s time for me to expose everybody now; that time has come.

I take no blame for what is happening; if there is any reconciliatory meeting, any meeting where the progress of APGA will be discussed, that meeting should be properly convened; people should be properly invited and notified, I will be the first person to be there. Because one after the other, I will look into their faces and tell them what they have been doing, which I have refused to tell the public”.

Let’s keep our fingers crossed till then, shall we? (Big Glaww)