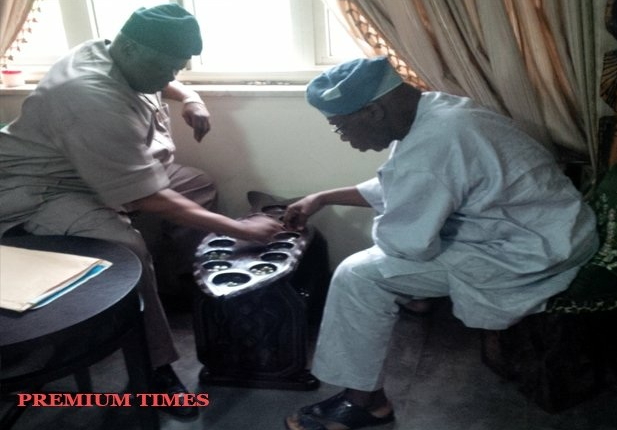 August 6, 2015 – REVEALED: Obasanjo Is Addicted To Playing Ayo Board Game, How He Allegedly Ignored Reporters Waiting For Him

The old man dropped the last seed in a hole on the Ayo board and slapped his palm against his thigh with glee – he had just scored a vital point in the game.

According to Yorupedia, Ayo is a Yoruba game “played in a carved wooden box, containing twelve holes (six holes on each side), and forty-eight Ayo seeds (four seeds in each hole).

“Two individuals take turn to play this game, which runs anti clockwise.
“The first player begins by moving seeds from his right hand side to the opponent’s side. If the seed-movement terminates in a hole with three or less Ayo seeds, this player picks up the seeds, and seeds from preceding holes, if any.

“Players take turn until the seeds are exhausted. The player with upper hand is called Ọta, and the weak or the losing player is called Ope. Spectators’ comments on the direction of the game add colour to the game.
“If a player records three straight wins, he becomes a champion (Ọta), the loser (Ope) quits; a new player takes over

. Ayo game requires deep thought, and good strategy to move seeds with the ultimate aim to win. Ayo, a relaxation game is played by menfolk; the meeting point is usually under a big tree with shade or restaurant.”

But the tough game that Friday afternoon between former President Olusegun Obasanjo and his opponent, a Chief Akanle, is holding in the right hand corner of Mr. Obasanjo’s living room in Abeokuta, the Ogun state capital.

“Aarrgghhh!!!” Mr. Obasanjo barked, as he sized up the feat, his eyes lighting up behind his spectacles.
His opponent, an equally elderly figure, stared hard on the board, and then scooped up his seeds.

We had scheduled a 2 p.m. interview with the former president at his hilltop mansion in Abeokuta.
He returned home at exactly 2 p.m. – from Tanzania – but dived straight into an Ayo game with Chief Akanle in his modest living room.
‎We waited patiently.

Two chandeliers hung in the air conditioned room where two framed photographs – one of Obasanjo and another of himself and his wife (who the former president affectionately call Iya Funsho) – rested on a giant wooden cabinet.

On a wooden stool, a Beulah’s Bilingual and Parallel Bible lay atop a pile of books.
Hanging on a wall was a photo of the former president, smiling in a flowing agbada, with an inscription: “A man after God’s heart”.

At a corner of the room, the two elderly men remain engrossed in their game, cheered on by group of spectators led by a chieftain of the Peoples Democratic Party, Oyewole Fasawe.
A joke about whether the players’ sights are failing elicited a chuckle from Mr. Fasawe.
The door that led into the mansion opens to a portrait, leaning against a giant refrigerator, of the former president in a military outfit with an inscription: “Obasanjo in action”.

But the ‘action’ this Friday afternoon was happening inside the living room.
Mr. Obasanjo scooped the Ayo seeds and spreads them into each of the holes on the board.
His opponent did the same.

It kept on and on. The former President is a master at this game. He kept winning and winning.
Mr. Fasawe and some visitors and aides of the former president cheered from the sidelines.
About half an hour later, the former president lifted his face from the board, towards the direction of Musikilu Mojeed, the Managing Editor at PREMIUM TIMES, and spoke in Yoruba.

“Mojeed, I’m coming o. I just want to defeat this my younger brother three more times only.”
The minutes turned to about an hour as we continued to wait for the former president’s treble.
The silence that descended on the room was punctured by Chief Akanle, immediately after his hand dropped his last seed in a hole.

“Oooooohhhh!!” He screamed. He has lost again.
Mr. Obasanjo responded by quietly lifting his cap and vigorously clawing at his skull.
One aide served a cup of steamy hot tea to Akanle, and returned almost immediately with a phone call for Mr. Obasanjo.

The general paused to take the call, with his eyes still fixated on the board.
The aide mischievously kept urging Chief Akanle to drink the tea to suppress the pain of defeat.
The game dragged on.

At the end of the third game, he announced he’d decided to aim for one more victory in honour of his waiting interviewers.
The game continued.
‎
It was almost 3:30 p.m. when Mr. Obasanjo rose, abruptly, from the Ayo game and marched into an inner room. We moved in.
The inner room is a small enclosure, with a pile of books – one of the books, The Nigerian Civil Service of the Future by Tunji Olaopa, and magazines heaped on a centre table.

The interview began with a casual chat about the former president’s book, My Watch, “to set the records straight” and his letters to the immediate past president on how to tackle Boko Haram.
“They were turning Boko Haram to a religious issue. It is not a religious issue. He (Jonathan) was seeing it as a northern plan. It wasn’t. It was a menace waiting to happen, and he didn’t see it that way, which was unfortunate,” Mr. Obasanjo said, a sad expression crossing his dark face.

“I did everything I could to help him.”
Interviewing Mr. Obasanjo without conducting adequate research is like stepping on a land mine.
When he was asked why he wrote, in his book‎, that Tony Anenih, his erstwhile closest friend, teamed up with the late Umaru Yar’Adua and James Ibori to plot his downfall; Mr. Obasanjo denied making the statement that way.

“Show me where the book said that.” He was shown.
The succeeding line of question provoked him and he threatened to walk out of the room.
One and a quarter hour later – at the end of the interview – the general walked out of the room and marched straight back to the Ayo game.

Chief Akanle had been waiting patiently. He was desperate to tackle Mr. Obasanjo again, and possibly defeat him a few times.
The game continued. Mr. Obasanjo again had the upper hand.
We were invited to lunch at the dining table – a meal of white rice and stew (with a piece of fish).

More guests arrived – a man and a woman – and herded towards the players.
Mr. Obasanjo acknowledged their greetings with a nod of his head, his attention fixed on the wooden board before him.
One of his aides said he also plays squash to keep his physical fitness.
When we hinted about about a photo shoot with him after the interview, Mr. Obasanjo said, in the middle of an Ayo move, that it was a good idea.

We waited another hour for the shoot.
He never rose from the game. When we tried to press him for to do so, Chief Akanle screamed at us, asking us to let the former President enjoy his game.

Mr. Obasanjo remained quiet, engrossed in the game, while we waited.
He kept saying we should wait. The waiting dragged on, just like the Ayo game.

He never rose, and he didn’t observe when the three of us sneaked out of his living room and out of his gate, dissolving into Abeokuta town.