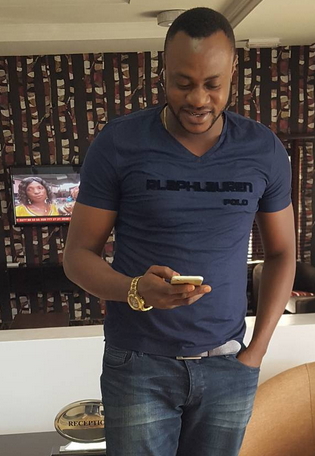 After the death rumour that trailed popular Nollywood actor Odunlade Adekola last week, it seems the Abeokuta-based actor has joined the growing list of entertainers using lie for cheap publicity.

Over the weekend, the actor was rumoured to have been shot dead by some robbers who invaded his home in Abeokuta.

The news went viral among Nigerians home and abroad especially his die-hard fans who couldn’t keep the feeling of sadness to themselves.

48 hours after the news broke, the Ekiti-born actor released an official statement dissociating himself from the bad tale.

However the statement appeared to have exposed the initial story as a strategy for Odunlade to have more followers on the social media.

“It has come to my hearing that I ODUNLADE ADEKOLA was attacked and being robbed, there is no iota of truth in the news, I am hale and hearty, where the news surfaced from I don’t know. I am using this medium to thank all my fans, friends and family who have text and call. NOTE: my I.D on social media are:
Facebook Page ODUNOMOADEKOLA
Twitter: @ODUNOMOADEKKOLA
Instagram: @ODUNOMOADEKKOLA
PLEASE BE WARNED…. BEWARE OF SCAMMERS
IRE LOJU WA O MA RI OOO…… please Re.BC…
SIGNED
@ODUNOMOADEKOLA”.

The fact that the actor sufficiently mentioned his social media IDs is now making many intelligent and keenly observant fans to suspect that the initial death story was orchestrated by Odunlade himself in a bid to later get curious and worried millions of members of the public to troop to his social media page to follow up.

“This Odunlade dude is such a scam. I’m highly disappointed. Who comes on Social media to market his social media account after such a bad news has been published about him?”, Shalewa Olaore blasted him on Facebook.

“Did ay one see the poo of a statement Adekola posted about his death? Nigerian celebs will butcher their own family to earn cheap publicity such a shame I knew the death rumour was fishy and it’s the handiwork of the actor himself. I dare anyone to prove me wrng”.
“Sunday Dagboru has killed me with lie oooo. Just because of social media followers, dis guy tells lie with his ow life. I duff my hat Mr Desperado”,Yinka Yinusa stated.

Within 24 hours of the death rumour, Odunlade Adekola gained over 25000 Instagram followers.