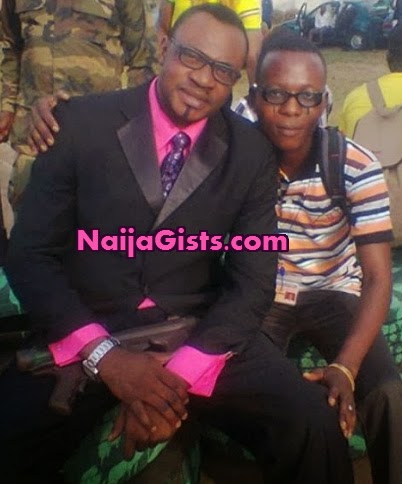 Popular Yoruba actor Odunlade Adekola has granted his first interview of the year.

This is coming few days after the premiere of his movie, Alani Apamolekun at Obasanjo Library in Abeokuta Ogun state.

The actor talked at length about his marriage, career,education and many more in an exclusive interview with Saturday Beat.

As a big boy in Nollywood, why do you prefer to live in Abeokuta instead of Lagos that is known as the entertainment headquarters?

I am comfortable in Abeokuta and there are a lot of beautiful and serene places here. All my family members are in Abeokuta. I was not brought up in Lagos so I cannot move to Lekki or Ajah. Living in Lagos does not mean that one is rich or successful. Neither does it mean that Lagos is paradise. The mentality of everybody is different, I am in Abeokuta and I would continue to be here. I am not saying that I cannot build a house in Lagos but presently, I am in Abeokuta and I have not seen what would make me relocate from where I am. This is where I was before everybody in Lagos knew me, so why would I leave Abeokuta when everybody now knows me?

How would you describe the year 2014?

How did you start acting?

I was still a very young boy when I started. I do not want to say I started from church because I have come to realise that church drama is different from what we do. I had a childhood friend, Tunde, who was a part-time actor and he introduced me to a theatre group that rehearsed near my house. One day, he invited me to join the group and I agreed. I went there that day and the man in charge asked me if I could act and I said I could. He then told me to act like a crazy person and when I did that, everybody there began to clap. That was how I started gradually. Later on, I got to know about to go Association of Nigeria Theatre Arts Practitioners (now Theatre Arts and Movie Practitioners Association of Nigeria) and I joined fully in 1998.

Often times, you act the role of a comic character in films, why didn’t you go into mainstream comedy?

I believe that anything you want to do in life would come your way, don’t force it. When I started acting, I did not start with comedy. People discovered that talent in me. People tell me that I am funny but I don’t see myself as being funny. I don’t even see myself as a comedian but if it comes my way, then it is from God.

Can you tell us about your latest movie, Alani Pamolekun that was premiered last weekend?

It is a story of an armed robber who also wants to be the most powerful person in the underground world. All he wants is power and he does not want anyone to be more powerful than he is. So, he does anything to become more powerful. He is a daredevil that believes there is nothing he cannot do.

What moral lesson is the movie meant to teach?

It teaches contentment. One has to be contented with what he has. Also, armed robbery is a very bad thing to indulge in but unfortunately, these robbers have godfathers that back them. The movie also preaches to the politicians who do not care about the people who voted them into power. The movie tackles a lot of issues and there are lessons to be learnt.

Did your parents oppose your choice of career?

No, my parents loved the idea. When I told my father, he really encouraged me and my mother was not against it at all. My father, being the head of the house, put his weight behind me and gave me his full support. He could have told me to drop the idea but he did not. It was only one of my uncles that did not really support my choice of career but now he’s the one that tells me to bring films for him to watch.

What did your uncle have against your career?

He believed that it would have taken much of my time and distract me from my education. I bluntly told him that I wanted to become an actor and to help my case, my father called him and told him to allow me to pursue my dream.

While you were growing up, what was your future ambition?

Like many children, I did not have one and I remember that when we were in school and our teachers asked who wanted to become a doctor, my friends and I would raise our hands. It was the same when we were asked about being a lawyer, engineer, etc. All I knew while growing up was that I loved doing business. I am currently in the University of Lagos where I am studying Business Administration. I like being the head of a business; I love the feeling I get while coordinating people in order to make my business better.

What influenced your decision to go back to school?

In this life, I will continue to read and acquire knowledge till I die. It feels good to be famous and popular but education is the greatest thing. My fame is not as valuable as my education. The more you read, the more you learn about new things and broaden your horizon. The more you walk with learned people the higher your chances of increasing your intellectual quotient. I cannot say that because I am popular and I would relent in my efforts of acquiring knowledge, no. I have to package myself and be better than I am.

But did something happen to influence your decision to go back to school?

To be sincere, nothing happened and nobody advised me to go back to school. The truth is that it is difficult to convince popular artistes to go back to school because of their celebrity status. But for me, it was something I had in mind and I am glad that I am accomplishing it. Education for me is a mission I have made up my mind to pursue to the highest level.

Was there any time you wanted to quit acting?

It is possible for such to have occurred but I cannot remember of any right now. Also, my Christian background has also helped me a lot to know that whatever happens to us is decreed by God. I see any challenge as God strengthening me. I don’t think anything has ever happened that has made me consider quitting my job.

Is it true that there is a battle for supremacy between you and Mr. Latin over who is more popular in Abeokuta?

People that started this rumour did so because they wanted to put food on their table and they decided to do it with my name. Mr. Latin is my boss and has been so supportive since I started in the industry. He is a brother and we talk a lot on the telephone. The only time I ever travelled to Austria, he was the one that facilitated it.

But it was reported that both of you were at war because of Globacom endorsement deal.

Before they contacted him, I was the first person they called. They asked me to help them contact him and that was all. When they called me, I immediately called him and said, “Oga, Glo called me and asked for your number.” When they wanted to sign the deal, he told me and he has been with them since. So there is no such thing between us.

I think it is a set-up and I don’t know who could be behind it. I swear with everything I have in my life that I did not have any problem with the students. We were on a location working and the students were fighting because they were not allowed to put on their generator which would affect our recording. I only advised that the generator should be taken away for us to finish our job. I think the owner of the hotel and the students had some issues before, so he called the police and they were arrested. When I got outside and found out what happened, I went to the police station and bailed the students. It was a day to the naming ceremony of my last child. The next thing I heard after a week was that I was the one that arrested them. I learnt that they said since I was a Glo ambassador, they couldn’t do anything to me. The issue was all over the Internet and they called me from Globacom to find out what was happening and I explained to them.

Was it what affected your contract with them?

No, I signed a two-year contract with them and it expired.

We were attending the same church and on one fateful day, I walked up to her and asked if she would be in a relationship with me but she was sceptical because I am an actor. After much persuasion, she said that she would pray about it. We dated for about three years before we got married. We have been together for about 10 years now.

Young and popular actors have sugar mummies, do you have any?

I am not sharp at all and that is why I do not have a sugar mummy. If I was a sharp person, I should have had, I have never even thought of it because my lifestyle is too dull for that. If you are dull, you are dull; there is no two way about it.