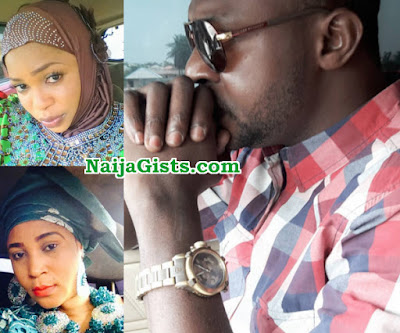 April 4, 2016 – Odunlade Adekola Warns Kemi Afolabi & Seun Ariyo She Baby To Stop Fighting Over Him, Threatens To Sue Them For Defamation

Popular Nollywood actor Odunlade Adekola is not a happy man at the moment.

This is because budding Nollywood actress, Seun Ariyo recently engaged his friend, Kemi Afolabi in a war of words over him.

Recall that Seun Ariyo aka She Baby recently engaged Kemi Afolabi in a war of words for refusing to return her cloth.

Insiders told NaijaGists.com when the fight broke out that the duo are actually fighting over the Nollywood actor who is now having issues with his wife, Ruth Adekola.

To cut the long story short, the actor has threatened to sue the ladies for attempting to defame him.

“I was shocked and enraged when I read in the news that two married actresses were fighting dirty over me. I don’t know why they would drag my name which I have spent years of hard work to build in the mud just like that. I have no idea why they would even mention my name in the matter and the first thing that came to my mind was to contact my lawyers and sue them for defamation but I decided against it because it would turn into another scandal.

“I am a happily married man with children and I wonder why either of them would make such damaging statement. Nothing like an amorous relationship exists between me and any of them. In fact, I have only had a one-on-one encounter with Seyi Ariyo about two times and I doubt we have seen each other in the industry up to four times. So, where did such claims come from? They are just using my name for cheap publicity probably to make their movie popular but why would they want to do such at the expense of my family’s happiness? I implore these ladies to stop using my name for cheap publicity and face their craft. If such happens again I may be forced to involve my lawyers in the matter.”

It is widely believed in Nollywood that Odunlade is in love with Kemi Afolabi however, Seyi Ariyo is also trying hard to woo him.

All this ‘wahala’ has reached his wife and the mother of his 4 children.

As it stands, the actor is not at peace with Ruth Adekola.

A source told NaijaGists.com that Miss Adekola seems to have had enough of Odunlade Adekola’s extramarital affairs scandal.