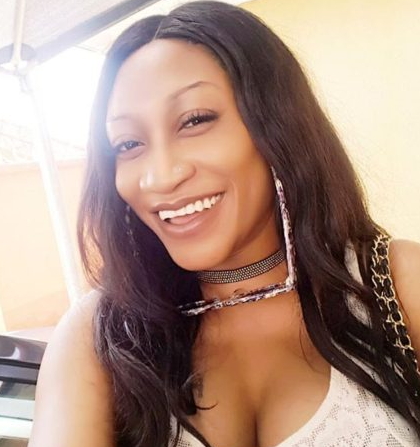 Though, she later deleted the photo of the dogs she had posted on Instagram after being tongue-lashed by some of her fans for laying claim to another man’s property, the act left a dent on her image. Even Kenya Moore referred to her on social media as “some fraudulent Nigerian actress”.

But just as her fans were putting the ugly incident behind them, Okoye put herself into another trouble after allegedly increasing the size of her butt through ‘photo shopping’.

In the photo Okoye posted on her social media platform, she was seen posing in the front of a gate, rocking a leopard-print gown, with her butt visibly bigger than usual. But after a closer look, it was discovered that the butt had been ‘photo shopped’, earning her incessant bashing and mockery from her colleagues and fans. While some fans condemned the mother of two for displaying such sensuality on social media, others mocked and accused her of being a Kim Kardashian wannabe.