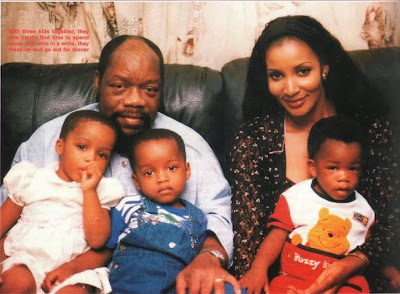 Oct 24, 2013  – Ojukwu’s Family Wants Bianca To Show Proof She Was Legally Married To Him

Some family members of the late Biafran leaders and Ikemba Nnewi, Chukwuemeka Odumegwu-Ojukwu, has challenged the Nigerian Ambassador to Spain, Mrs. Bianca Ojukwu to show proof that she was legally married to the deceased.

This was the fresh twist introduced into current legal battle rocking the family of the late Ikemba of Nnewi over sharing of his estate.

In a 19-paragraph statement of defence brought by the eight defendants, through their counsel, George Uwechue, they denied that Bianca, who instituted the action on behaif of her two children, ever married to the late Biafran leader.

The claimants, in suit No. LD/1539/2012, prayed the court to declare that they were entitled to the possession and occupation of the property known as No 29 Oyinkan Abayomi Street in Ikoyi, Lagos until the harmonisation of the management and administration of the assets of the first defendant (OTL).

At the resumed hearing of the matter yesterday, the absence of counsel to Bianca and her children forced the court to adjourn the suit till December 10 for adoption of written addresses.

Afamefuna and Nwachukwu had, through their lawyer, Chris Ezugwu, prayed the court to declare as illegal the threat of forceful ejection from 29, Oyinkan Abayomi Street by the defendants. They also urged the court to declare that they were entitled to possess the following property: No. 13, Hawksworth Road, Ikoyi (now known as No. 13, Ojora Road); No. 32A, Commercial Avenue, Yaba, Lagos; No. 30, Gerard Road, Ikoyi, Lagos; No. 30, McPherson Avenue, Ikoyi.

Bianca’s children stated that throughout the period their father was struggling to retrieve the property from the government, the second to seventh defendants “never played any role in the struggle nor contributed financially or otherwise to the realisation of the struggle.”

Besides, the claimant is asking for an order of court restraining the defendants, their agents or privies from interfering with the claimants’ possession and control of the properties.

In their statement of defence, the 1st to 7th defendants, through their lawyer, George Uwechue, averred that the subscribers of the memorandum of association of Ojukwu Transport Limited (1st defendant) at incorporation in 1952 were L. P. Ojukwu and Betram Chukwuemeka Obi, adding that the late Ojukwu and one Prof. Joseph Ojukwu (2nd defendant) were later appointed as directors in 1953.

They stated that Ojukwu thereafter ceased to be a director of the company, prior to the Nigerian civil war and was reappointed as a director on December 16, 2005, while the 3rd and 4th defendants were appointed directors in 1954 and 2005 respectively.

They added that the claimants’ statement of claim contained tissues of lies and distorted facts.

Besides, they stated that Ojukwu moved to Enugu State and had not lived at any of the company’s property as alleged by the claimant.